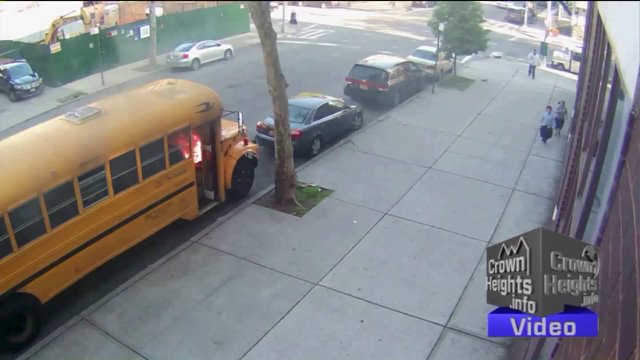 CROWN HEIGHTS, Brooklyn — An 11-year-old boy has been arrested in connection with a Brooklyn bus that was set ablaze Sunday.

The boys were caught on surveillance video methodically loading up an empty, parked school bus with cardboard Sunday evening in Crown Heights.

After a few minutes, the first flames ignite. Once the entire bus was up in flames, the boys watched and recorded the fire on their cell phones.

“I ran home and called my father and he came and he called emergency,” said 10-year-old Shaina Gansberg, who witnessed the incident.

PIX11 spoke on the phone with the owner of the bus, Leonid Yavich, who says the bus was parked on Brooklyn Avenue an hour before the boys allegedly torched it.

“Reaction to what happened is very, very sad that young kids, in my neighborhood, which I've lived for the past thirty years, which is a racially integrated neighborhood, that we have kids running around and the only feeling of accomplishment they have is from destruction,” said Yavich.

As for the young suspects, police have so far caught up with one of them, an 11-year-old boy.

Binyomin Lifshitz, a spokesperson for Shomrim, an Orthodox Jewish NYPD affiliated community security organization says there are questions now about whether the boys were connected to a handful of other bias incidents.

Lifshitz said this is the third crime in the last week that Shomrim has faced that involved youth crime.

"It’s a troubling new trend that we haven’t seen for a while,” said Lifshitz.