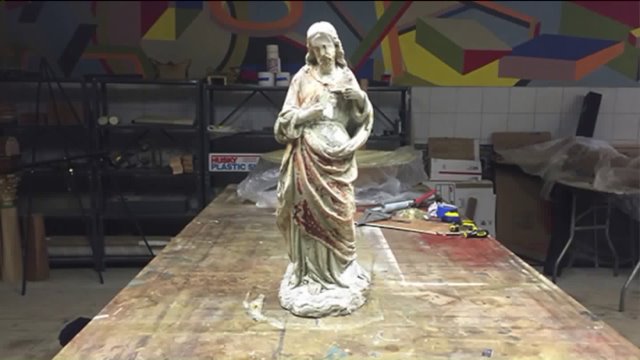 WILLIAMSBURG, Brooklyn – A statue of Jesus Christ stolen from outside a Roman Catholic church in Williamsburg has been recovered. A Good Samaritan found it outside his building in the trash. He retrieved it and safely returned it to the parish last night.

“I took it from the garbage and brought it into my house,” Gabriel Mercado said. The 29-year-old Mercado lives just down the street from Saints Peter and Paul Parish on South Third Street.

The  Sacred Heart Jesus statue was stolen last weekend. The statue was perched outside the rectory. Surveillance video shows three people - a man and two women - laughing as they ran off with the four foot tall statue.

The next day, Mercado found it sitting outside on the front steps of his apartment building. He went inside for a few minutes, came back out and by then an unsuspecting neighbor had mistakenly put it in the trash. But Mercado realized it’s importance. He said the statue looked familiar but he couldn’t place it. He knew he had seen it somewhere before.  Turns out, his mother, Carmen, is a longtime parishioner of the church, which is just up the street.  Mercado said he took it home for safe-keeping until he could figure out what to do with it. During that time, the statue sat safely in the family living room.

It wasn’t until a few days later, when Gabriel showed it to a friend, that the mystery was solved. The friend happens to be the brother of the church secretary, Waleska Soto.  Soto, along with other members of Sts. Peter and Paul, had been giving interviews to media outlets, imploring the thieves to return the statue depicting Jesus Christ holding a heart, showing his love for all people.

“It was just pure happiness to know it’s coming back home. What I told Gabriel was what he did - it’s a blessing. You rescued it,” Soto said. She added “It's on its way home and I have to believe that comes from high above.”

The church has referred to it as the “statue of the community.” They tell PIX11 people of all faiths and denominations would stop by and admire it.

For that reason, Soto says the thieves owe the neighborhood as a whole, an apology.

"Every action has its consequences," Soto said. "With no hard feelings, I hope they ring the bell and come say I'm sorry personally that would be awesome."

The crooks did not return the statue but fate intervened. The statue made its way back home last night, by way of Gabriel Mercado, named after the archangel Gabriel.  Mercado has harsh words for the thieves.

“They don't have no life," Mercado said. "They don’t believe in God, they just yanked it out.”

Friday morning, the precious statue was already sent to a place in Mt. Kisco, New York to be restored. The vandals had defaced the statue and part of its hand and a section of its base broke off.

“They draw on it, put a mustache on it and goatee here,” Mercado said.

D'Ambrosio Ecclesiastical Art Studios, Inc. has volunteered to restore the statue as well as donate a bigger, heavier version. The larger statue will go outside the rectory in the stolen statue's place, while the recovered statue will go inside the Parish's new church which is expected to be complete in 2019.

The stolen statue was donated by a couple in New Jersey, an heirloom they say was in their family for about 100 years. It was donated in 2012 to replace a similar statue – also stolen from outside church property.

Mother Bendita Diez, Mother Superior of the parish told PIX 11 about the bandits, “What they did, it’s disrespectful to our faith.”

“I definitely forgive them," Diez said. "I hope they understand what it means to us and I hope they don’t do it again."

“Good is always bigger than evil" Diez said. "God always overtakes evil and takes good things from what is bad,” she added.

The NYPD says they are investigating the case as a possible hate crime.