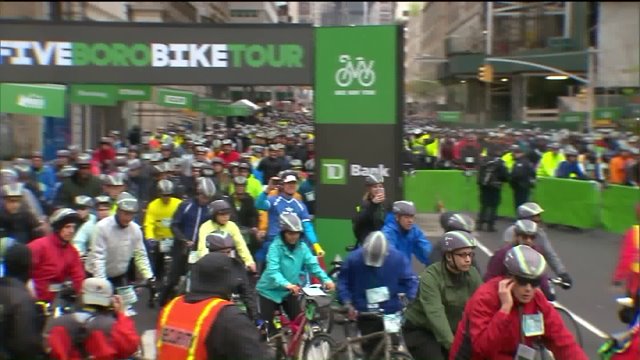 NEW YORK — An unseasonably cold 49 degrees, headwinds that became strong at times, and frequent and sometimes heavy rainfall aren't conditions anybody welcomes on the first day of May. But they happened to be the conditions that more than 30,000 cyclists braved on Sunday as they rode in the annual TD Five Boro Bike Tour.

Despite the late winter-like weather, the appeal of having 40 miles of usually busy streets and highways open only to bikes made the event appealing to cycling fans. They come every year from across the country and from many other countries to view the world's most exciting city from a very unique perspective and at a self-selected pace.

The rainy and windy route took cyclists through all five boroughs, from Lower Manhattan, through Central Park to Harlem, then through a corner of the South Bronx, down the FDR Drive to the Ed Koch Queensboro Bridge and into Astoria.

From there, riders headed through Long Island City, Queens and into Brooklyn neighborhoods including Greenpoint, Bushwick and Carroll Gardens. Then came the roughest stretch — the Brooklyn Queens Expressway in a rain-soaked headwind, and across the three mile span of the Verrazano Narrows Bridge, half of it uphill, into Staten Island and across the finish line.

Among the 32,000 cyclists of all skill levels was a team from PIX11 News, which was also one of the event's sponsors. PIX11 News meteorologist Mr. G was the master of ceremonies at the kickoff of the all-day event.

The bike tour is the world's biggest charitable bike ride, with proceeds funding free bike education programs in the New York City area. In 2015, Bike New York, the parent organization of the bike tour, taught cycling skills to more than 16,000 children and adults.