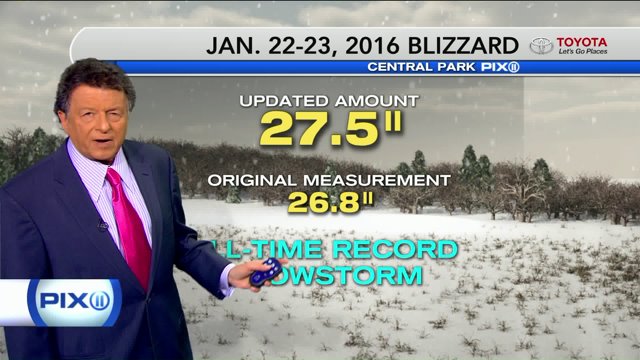 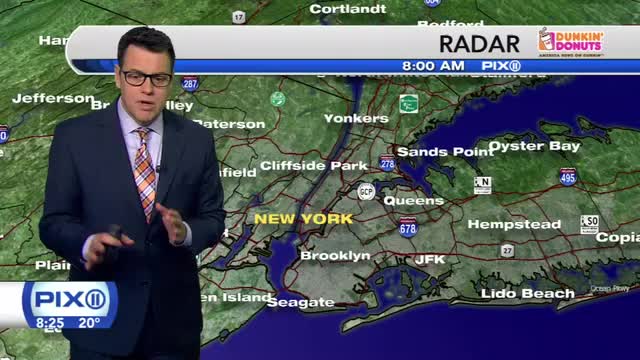 NEW YORK — We told you first! January's blizzard set the record for biggest snowfall on record in New York City, although that milestone was only confirmed now, more than three months after the storm buried the tri-state area.

In the blizzard that lasted from Friday, January 22 to Sunday, January 24, we told viewers right after the storm ended that we suspected that the National Weather Service underestimated the measurement.

Now, the National Oceanic and Atmospheric Administration has increased its previous snowfall total of 26.8 inches, which was just shy of the record of 26.9 set in 2006, to a whopping 27.5 inches, making the storm the snowiest since official record keeping began in Central Park in 1869.

“Snowfall isn’t the easiest weather event to measure," said PIX11 meteorologist Chris Knowles, who called it correctly during our special report on the morning of January 24. "The weather service should be applauded for ensuring the totals from our biggest snowstorm ever are now accurate.”

NOAA says the inaccurate total of 26.8 inches was caused by a communication error between the weather forecast office in Upton, New York and the Central Park Conservancy, which takes official snow measurements in Central Park, which is the official weather measurement station of record for New York City. The snow team found the mistake when reviewing the Conservancy’s logbook.

The preliminary Central Park measurement will be adjusted upward to 27.5 inches, which will become an all-time snowfall record for New York City.

NOAA's snow team also invalidated the preliminary record measurement of 28.1 inches at Newark International Airport. The team found that snow was measured hourly instead of the standard procedure of measuring every six hours, which led to an inflated preliminary total. They are working to find an accurate total, so the old record of 27.8 inches set in 1996 currently stands.

“Snow measurements are extremely difficult to take because precipitation is inherently variable, a problem compounded by strong winds and compaction during a long duration event,” said Louis Uccellini, Ph.D., director of the National Weather Service.