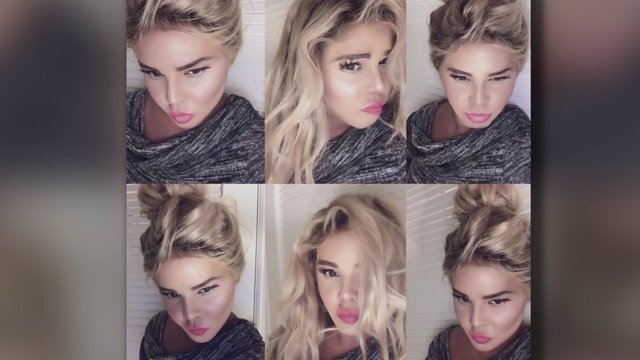 NEW YORK -- To say her fans reacted to her new look is an understatement.

Rapper Lil’ Kim posted an image to her Instagram account and her fans called her out almost immediately. She is practically unrecognizable from her previous self and many of her fans are accusing Lil Kim of trying to look “white,” rejecting her black identity.

“She started becoming a punchline and a big joke and for me it was very painful. What it looked like to me was someone who was wearing her deepest agonies, her biggest insecurities on her face. Like she was letting the entire world know she hated what she was and had to demolish it,” said Williams.

Williams said Lil’ Kim also appeared to going beyond just a bad self-esteem and now giving in to societal pressures over what is considered to be beautiful.

“It’s really painful as a black woman to watch this because I know how she feels. Being a black woman in America or any country where there’s black and brown people there’s this unspoken or sometimes spoken hierarchy. The lighter you are, the straighter your hair, the lighter your eyes, the more beautiful you are. 200 years ago it would have been the difference between life and death to be quite honest. That’s the reality,” added Williams.

African pop star, Dencia, who is Nigerian and Cameroonian has come under fire for her promotion of a product called Whitenicious. Yes, that’s the real name. It isn’t sold in the U.S. but can be shipped here and it’s popularity worldwide is documented across social media platforms. The pop star, herself, said she’s made a small fortune from the company – and is an avid user herself.

The issue of lightening ones skin or appearing fairer isn’t isolated to only the black community. South Asian and Asian cultures have glorified products aimed at so called darker complexions. Take a look at these ads featuring a popular cream known as Fair and Lovely – a Unilever product. A young woman can’t get the gigs she wants because she’s too dark, use their cream and suddenly she’s more desirable.

There are –however – dangers associated with the use of many of these products. Dr. Michael Jones of Lexington Plastic Surgeons said he’s seen it first hand.

Overuse of these products can predispose you to cancer, it can thin the skin, dry the skin, even create a bluish tint.

“There are a lot of people who aspire to different things in their appearance. Whether it’s the shape of their nose, whether it’s the shape of their lips or shape of breasts or butt. Some people aspire to have different color skin. We see whites, Caucasians who are on the beach in the sun all day long. Why? Because they want to be darker. Conversely you have people with darker skin, who would like to potentially be lighter. We all have differences and things we want to improve, but I think in general taking it to this extreme is too far,” said Dr. Jones.