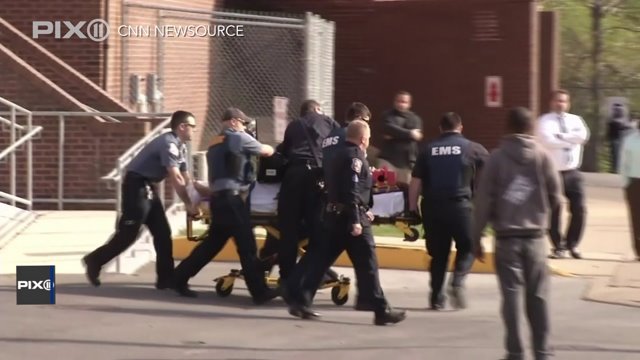 WILMINGTON, Delaware -- Maybe it was about a boy, some said; others said it wasn't. Whatever it was about, the fight in a bathroom at Howard High School of Technology in Wilmington, Delaware, ended in death for a 16-year-old girl.

"We know it is happening in the streets," the Delaware News Journal newspaper quoted the Rev. Sandra Ben, of Praying Ground Community Church in Wilmington, as saying. "But now we are talking about violence happening in a place that normally should be a safe haven."

No one has been charged in connection with the fight and the girl's death. Police said they were conducting interviews. An autopsy was scheduled to determine the cause of death.

The high school held an abbreviated session Friday to allow students to meet with grief counselors, according to local media reports.

The fight broke out around 8:15 a.m. Thursday as classes started, in a bathroom on the main floor of the school, Principal Stanley Spoor said at a news conference.

"There was an altercation that initially started between two people, and my understanding is that additional individuals joined in against the one person," said Gary Fullman, chief of staff to the Wilmington mayor.

The student was badly injured and transported by helicopter to A.I. DuPont Hospital for Children, where she died, Fullman said.

What exactly it was all about remains under investigation.

CNN affiliate WPVI reported that police were investigating whether the fight may have been over a boy. The teens interviewed by the News Journal said it wasn't.

The News Journal quoted two of Joyner-Francis' fellow students who said she was going to "settle the beef." They didn't say what the argument was about.

One thing friends of the 16-year-old seemed to agree on: she was an unlikely target for such violence.

"She was real nice," WPIV quoted fellow student Shane Gallagher as saying. "She treated us like family and we treated her like family, and it hurts our hearts we can't ever see her anymore."

Amy was an honor-roll student and manager of the wrestling team, WPVI quoted City Councilwoman Sherry Dorsey Walker, a family spokeswoman, as saying.

I am so sad & hurt by the young girl who lost her life at school today getting jumped. My heart is so heavy for her & her family #RipAmy

We live in a world where a 16 year old girl gets murdered by her classmates in a school bathroom while other classmates record it. #RIPAmy

fighting for boys is NEVER worth it, im disgusted by those petty high school girls who ended amy's life, they deserve life sentence #RIPAmy

"My heart is broken," Wilmington Mayor Dennis Williams said at the news conference. "I am so upset that a young lady lost her life today. Things like this shouldn't happen. My heart bleeds for the family, the kids who go to this school and the administrators, and our city."

"This is not only an unspeakable tragedy for her family, but also for the school, and the entire community," said a statement on the school district website. "We express our prayers and deepest sympathy to her family, who need your support and sensitivity at this time."

Classes will be held Friday morning but school will be dismissed at 11:15 a.m. Grief counselors will be on hand, a school spokeswoman said.