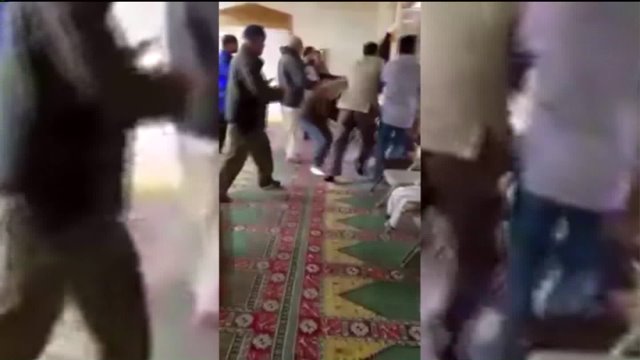 JAMAICA, Queens – The intrusion came in the middle of Tuesday’s afternoon prayers and without warning a man who just walked into the Jamaica Muslim Center.

After claiming that he was the Prophet Muhammad, he began randomly punching people who were on their knees in mid prayer Tuesday including a 69-year-old man and Akim Islam.

“He came behind us, and he hit one of our elders," Islam said. "When he hit someone, we have no choice. We have to stop him. He hit me. One is very bad injured. He's at the hospital."

In the days since the attack, members of this Mosque have been fuming over the fact the suspect - identified as 26-year-old Michael Voyard, only faced a misdemeanor assault charge.

But now, that could change and Voyard could ultimately face more serious charges.

On Friday , three days after the attack, the NYPD confirmed its Hate Crimes Task force is now investigating.

For the president of the Mosque, that’s welcomed news.

"We are very peaceful community, we always come here without fear, and we never expect it," mosque president Dr. Mohammad Rahman. "And we think this is a hate crime, to hurt Muslims."

The incident clearly struck a nerve among members, who posted signs on the fence outside, pleading for tolerance and justice.

"The message is we have to live peacefully in harmony and peace," Rahman said. "We cannot just hate somebody because of their race, religion or culture."

Voyard was arrested and released but again the Hate Crimes Task Force now has the case.