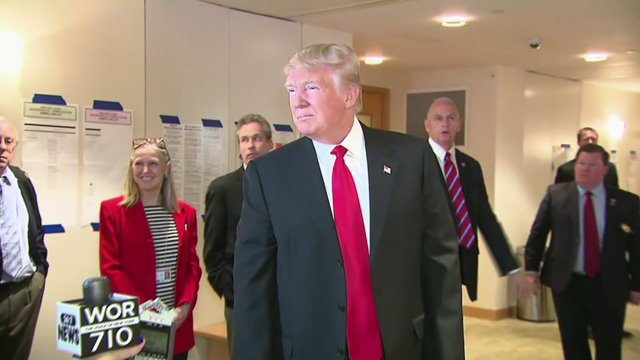 NEW YORK — For the first time in decades, New Yorkers are poised to play a crucial role in shaping the presidential nomination process. Some 95 delegates are up for grabs for the Republican party and 247 delegates are at stake for the Democrats.

Though Bernie Sanders was born and raised in New York, he will be in Philadelphia today. Cruz is also in Pennsylvania, holding an event Harrisburg. John Kasich will be holding two events in Pittsburgh and Maryland. Pennsylvania's primary will be held next Tuesday.

As Empire State voters head to the polls Tuesday, the stakes are highest for front-runners Donald Trump and Hillary Clinton, who are expected to emerge victorious here. And as wildly different as their candidacies are, Trump and Clinton find themselves in a similar position: hoping to gain validation and momentum after a string of recent disappointments.

Trump badly needs a sweeping win in New York — if Ted Cruz peels away a significant number of delegates, it will become that much more difficult for Trump to outright clinch the GOP nomination ahead of this summer's Republican convention. For Clinton, the challenge has more to do with optics: putting an end to Sanders' winning streak in the west and undermining his narrative that he's the Democrat with the most momentum.

As the presidential candidates and national media have descended on New York, local political figures in both parties are relishing the state's rare moment in the spotlight of a presidential election.

"It's been an unusual circumstance where New York is one of the deciding factors in the Democratic race, so that's exciting," said Democratic Queens Borough President Melinda Katz.

On the Democratic side, 247 delegates are up for grabs on Tuesday.

Although Clinton continues to have a sizable lead in delegates, the New York race comes after Sanders has won eight of the last nine Democratic contests -- a reality that the Vermont senator has repeatedly touted on the campaign trail.

"I think the Clinton campaign and the secretary are getting a little bit nervous," Sanders told CNN after last week's particularly combative Democratic debate in Brooklyn.

Tuesday's contests are also personally significant for several of the candidates who have roots in New York.

Trump is a Queens native and Manhattanite whose famous last name is featured on real estate properties around the city. For Clinton, the current juncture in the race marks something of a homecoming: she was a New York senator for eight years, owns a home in Chappaqua and her campaign headquarters is in Brooklyn. And while Sanders has represented Vermont on Capitol Hill for decades, he was born and raised in Brooklyn and has spoken fondly about his upbringing in the borough.

As she campaigned in Flushing, Queens, on Monday, Clinton took a measured tone, telling reporters that she would not take "anybody or any place for granted."

"I never count any chickens before they hatch. We are going to work hard," she said. "We are going to do everything we can between now and 9 p.m. tomorrow night when polls close here in New York."

Trump has focused most of his campaign efforts in the state in upstate New York. Speaking at a rally in Buffalo Monday night, Trump boasted about "New York values" and called the state a "symbol of American strength in the world."

"This is what the New York state party needs. We need this kind of excitement," Cox said. "We are indeed having our decisive moment in selecting the next president of the United States."

There are 95 delegates up for grabs in New York in the Republican race. At this stage in the campaign, every single one of those delegates matters.

Over the past few weeks, Trump has come face-to-face with the Cruz campaign's strong command of the complicated delegate allocation rules. The GOP front-runner has expressed frustration as he's watched Cruz walk away with victories and grow his delegate pile -- a sentiment that boiled over after the Texas senator swept the Colorado Republican convention earlier this month.

Trump is becoming increasingly vocal in his criticism of the Republican National Committee and the party's nominating process, calling the latter "crooked" and "corrupt."