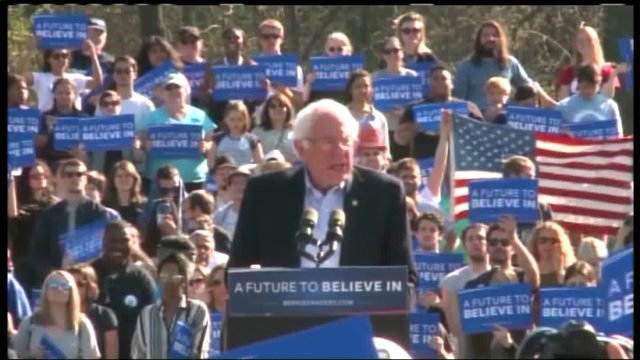 “I learned from Black Lives Matter,” Mr. Sanders said. “What I learned is how police in white communities are regarded very differently than police in black communities.”

Supporters then headed to Prospect Park with posters, buttons and "Feel the Bern" T-shirts on. The star-studded rally is another pitch to ensure high voter turnout on Tuesday.

"When I was a kid growing up in Flatbush. Our parents would take us to Prospect Park. They still have the seals and the elephants," Sanders said.

"But I was never here speaking to 20,000 people so thank you for being here," Sanders said to a sea of supporters.

Sanders touched on why his campaign is important, even mentioning Donald Trump.

"Mr. Trump will not become president of the United States. That's for sure," Sanders said.

Sanders' campaign said on Twitter the rally was the largest one yet, with 28,356 people.

Sanders has been making multiple stops throughout New York before Tuesday's primary. He sees winning the New York primary as a crucial point for his campaign nab the nomination from Hillary Clinton.

The latest polling, Clinton is leading Sanders 53 to 43 percent.

Whoa! 28,356 came out to Prospect Park, Brooklyn – our largest rally yet. Thank you! pic.twitter.com/XQXdwCLLlZ