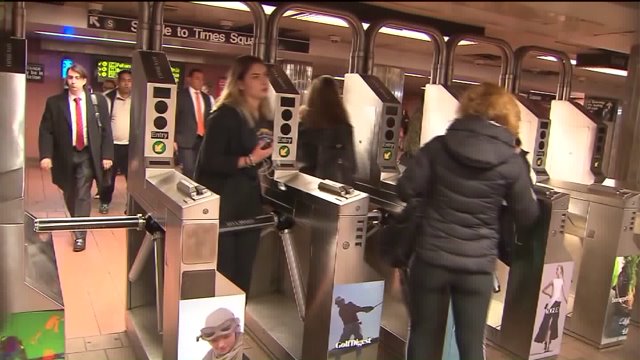 MIDTOWN, Manhattan — Forty-nine-year-old Manny Aguilar is a freelance construction worker who says when he is in between jobs and often doesn't have enough money for a full fare $2.75 MetroCard subway swipe.

"When I go through those periods," Aguilar told PIX11 News. "I have to choose whether to buy something to eat, pay rent or buy a MetroCard."

Aguilar, a Riders Alliance member, is one of the estimated 800,000 New Yorkers living below the poverty line who says he could really benefit from a reduced fare $1.35 MetroCard.

A study released by the nonprofit Community Service Society found that one in four low-income New Yorkers can't afford MetroCards.

For 300,000 subway riders, the cost of taking the subway exceeds 10 percent of their income, according to the study.

"More than 41% of low income Hispanics and 31% of low income African Americans are not able to pay fare," David Jones, the president of Community Service Society told PIX11 News.

A reduced fare MetroCard for those under the poverty level could cost the MTA $194 million a year. The study says that amount could be funded by the city budget, a gas tax hike or tolls on bridges.

Reduced fare MetroCards for low income riders have already been enacted in Seattle and San Francisco.

While the MTA had no comment, a spokeswoman for Mayor de Blasio said:

"The Riders Alliance and the Community Service Society have put together an interesting proposal, and we look forward to reviewing the report in greater detail."

The Community Service Society of New York has started a call to action and a petition.

For more information, you can go to their website by following the link.