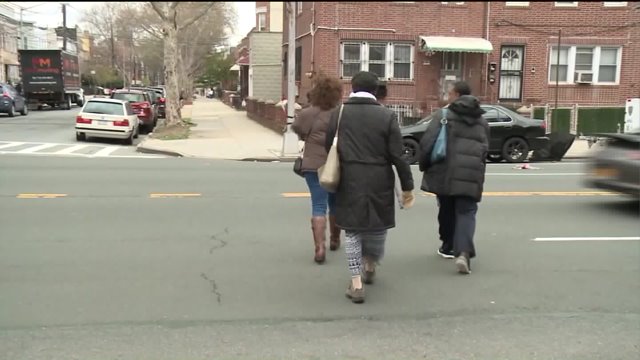 ASTORIA, Queens — 81-year-old Claudia Coger and her friends from Astoria Houses say they have to take their lives into their hands every time they cross this busy intersection of 21st Street and 30th Road.

There are curb cuts but no crosswalk, and, most importantly, no traffic light.

This particular stretch 21st street is a notoriously dangerous street with tons of traffic, between the RFK and 59th Street Bridges.

On April 6th, just a few minutes before 11 pm., surveillance video shows a silver or grey four door sedan that police say hit and killed a 45-year-old Astoria man at the very same intersection where elected officials have been demanding a traffic light for close to three years.

"You shouldn't have to take your life in your hands just to cross 21st Street," said Councilmember Costa Constantinides. "I call on the Department of Transportation to conduct a traffic study and install a traffic light at this corner to prevent further tragedies like this one," the Councilmember added.

Community leaders gathered just a few feet from where a memorial has been set up.

There is also a police sign looking for eyewitnesses to the fatal hit and run.

The Variety Boys and Girls Club is right across 21st Street.

The executive director worries about the safety of the more than 200 children who don't have a traffic light to help them cross the busy street each day.

"I tell them not to cross the street at 21st Street and 30th Road," Matthew Troy, the executive director of the Variety Boys and Girls Club told PIX11. "It is extremely dangerous."

A DOT spokesperson said: "We have studied this specific location for a traffic signal in the past. Although it did not meet the criteria at the time, we are taking another look at the intersection for potential safety enhancements."