‘Frank’ the bull escapes from Queens slaughterhouse, is rescued by Jon Stewart 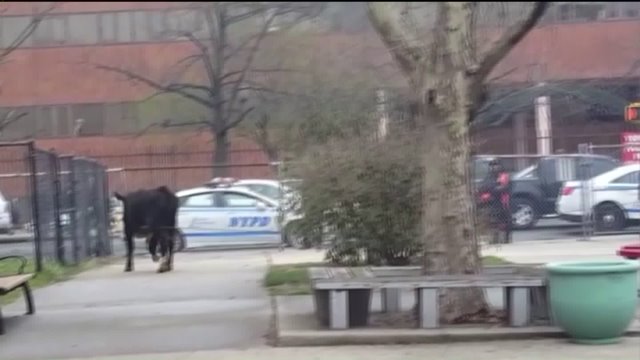 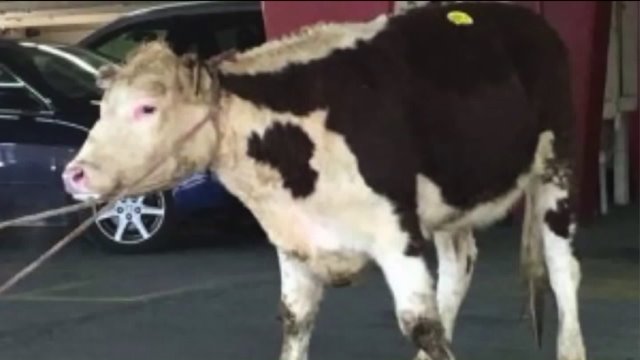 JAMAICA, Queens – A bull that ran loose through Queens, escaping from a slaughterhouse will now be able to roam free at an animal sanctuary thanks to comedian Jon Stewart.

The NYPD said the "vicious animal" fled as it was being taken down from a truck in the vicinity of Liberty Blvd. around 10 a.m.  and then wandered onto CUNY York College.

An Instagram user shot video of NYPD officers and students gathering near the cow in a grassy area of the Queens campus.

Less than an hour later, the fugitive bull, now known as "Frank" was detained. The bovine animal was first taken to an Animal Care Center facility in Brooklyn, police said.

Witnesses at the scene told PIX11 the bull belonged to Jamaica Archer Live Poultry and Meat Market on 165th Street.

The former host of the Daily Show and his wife Tracey have picked up  the bull and transferred it to an animal safe haven in Watkins Glen, New York, a Farm Sanctuary spokesperson said. Stewart and his wife have partnered with Farm Sanctuary, a national organization dedicated to protecting farm animals from cruelty.

The director of Farm Sanctuary said the bull is getting a check-up at Cornell's University Hospital for animals and will live out the rest of his days at the sanctuary.

In January, a cow named "Freddie" ran for its life after escaping from the same slaughterhouse. It was captured minutes later but a New Jersey animal rights activist, enamored with the brave escapee, took him in his animal sanctuary in Wantage.

Farm Sanctuary has released the following statement on the rescue:

All animals deserve to be rescued but by paying the perpetrators of this cruelty for the animals, we put more money in their pockets to purchase additional animals who will be subjected to the tortures of the animal industry.  Farm sanctuary rescues animals and negotiates their release by convincing the owners that compassion is the right path and that these animals are deserving of sanctuary. Our staff and volunteers work tirelessly to secure the voluntary release of these animals. Farm Sanctuary did not solicit funds nor were we aware prior to our intervention of anyone paying for the release of Frank Lee.