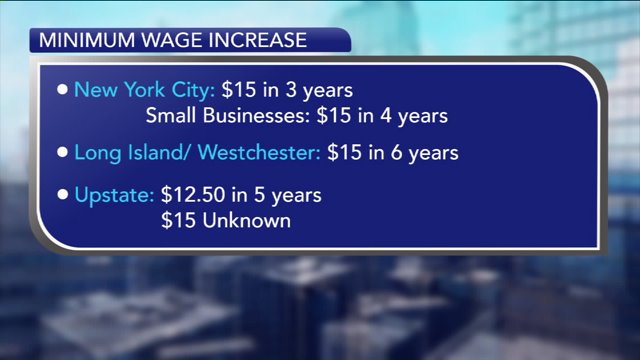 A state budget deal means $15 an hour will be a reality for minimum wage workers— however, it will take several years to go into effect.

"I am going to need that money to pay for tuition," Harlem student Adjoni Larode, said Friday.

Larode is looking for a job before she goes to college.

The minimum wage will go up gradually in increments each year. ​The breakdown varies in different areas of the state.

In New York City, it will be up to $15 in 3 years. Small businesses with less than 10 employees will have an extra year.

On Long Island and in Westchester minimum wage workers will earn $15 an hour in 6 years.

It is not known when $15 will be implement. Gov. Andrew Cuomo said it would be based on economic factors.

Gov. Cuomo, at the announcement of the budget deal, said the wage increases will help the economy.

"You give a person on a minimum wage a raise. You know what they do with it? They spend it. They don’t put in bank. They need it," he said.

Srikanth Chamakura, an owner of a pharmacy in Harlem, said he worries what $15 an hour will mean for his small business.

"I might have to cut down on other costs of an employee. Just to see how it functions. But I do understand the cost of New York, especially Manhattan, its really expensive," Chamakura said.

This has been a long fight for many workers. And while they must now wait for the gradual increase to $15 an hour, it is still a victory for those who have rallied and pushed for a living wage.