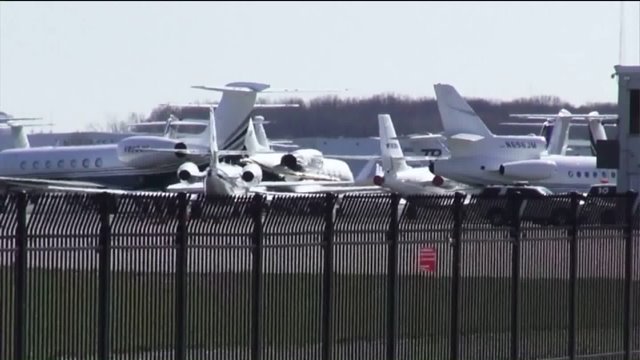 TETERBORO - Representatives from towns across Bergen County turned out to a public meeting at a Port Authority facility in Teterboro on Wednesday to urge the Federal Aviation Administration to postpone a test beginning Monday that would send more small planes and helicopters over suburban schools, hospitals and homes.

Public officials chided FAA representatives for largely excluding them from the proposal process. The new route would send more aircraft over Mahwah, Ramsey and towns down Route 17.

“It's very good that you have a room full of people right now, but your rolling out this plan on monday morning,” said State Assemblyman Tim Eustace, who represents much of southern Bergen County.

Officials from Rochelle Park, Ramsey, Paramus, Ho-Ho-Kus and Mahwah all said they received little or no notice about the plane path test or today’s public meeting. The test starts Monday.

The only people who spoke up in favor of the plan were from Hasbrouck Heights and Hackensack.

"I’m in favor of the change because I think it presents an opportunity for equity. I think that the entire region benefits from having Teterboro Airport here,” said Albert Dib, a representative from Hackensack, "For decades Hackensack and the surrounding communities have been absorbing all the burdens associated with noise and pollution and safety."

The FAA said that this plan has been in the works for roughly 10 years and is aimed at alleviating noise and pollution over Hackensack University Medical Center. But the new route would mean more planes over Valley Hospital and Bergen Regional Medical Center.

“They're swapping hospitals and they’re moving noise from one community to another without doing their due diligence,” said Joseph D’Arco, Borough Administrator for Paramus.

Elementary and high schools would also be impacted just as state testing begins.

After questions from lawmakers and PIX11 to provide a clear venue for public input, a media representative for the FAA provided this e-mail address for public comments: 9-aea-noise@faa.gov.

“The agency is accepting all public comments before we mover further into what would be a determination,” said Gary Palm, an air traffic manager with the FAA.

The FAA could not provide any specifics at today’s meeting about how many more planes would be flying over suburban communities like Mahwah or how loud the noise level would be. Representatives from the FAA said that they would start to gather this information in detail on Monday, when planes begin flying the new proposed route.