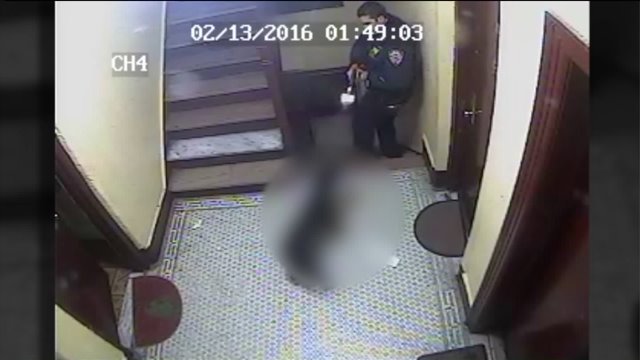 FORDHAM HEIGHTS, Bronx – A family is grieving after their beloved dog was fatally shot by a NYPD officer in the hallway outside their 5th floor apartment – an incident that was all caught on video.

"He took away a child of mine," Yvonne Rosado said. "He murdered my dog. I know murder is a strong word because people say its just a dog.  But no, that's my family."

Ivonne was dancing with her best friend 4-year-old Spike when he started barking at officers who were responding to a domestic incident call next door. When she opened the door to see what was going on, the dog wandered out in the hallway.

Surveillance video from inside the Bronx building shows the NYPD officer firing at the pit bull.

Irma Santiago, who made the 911 call that originally brought cops to her apartment, said her 16-year-old daughter witnessed the shooting of her neighbor's dog.

"She's really traumatized by this," Santiago said. "It could've went through Spike and hit her."

The clip then shows Yvonne embracing her dying pooch.

"He was trying to hold on, his tail was wagging and he's trying to lift his head," she said. "He just couldn't and the life just left him."

An NYPD spokesperson said the incident is being reviewed by the Force Investigation Division and the findings will be subject to a firearms discharge review board.

"The claim is that police shouldn't have shot the dog," said Yvonne's lawyer David Thompson, with the Manhattan law firm Stecklow and Thompson. "The dog didn't do anything and they killed it. As far as my client is concerned, she's very upset and they subdued her in a way that was excessive."

Yvonne wants the cop to be disciplined and to apologize. She has submitted a notice of claim, indicating the intent to file a civil lawsuit against the city.