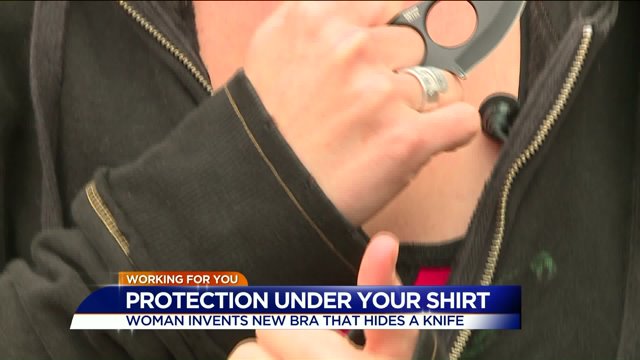 RICHMOND, Va. – A scary encounter led a woman to develop a bra that can hold pepper spray or a knife.

Last April, Jennifer Cutrona was training for a marathon. Her run took her to a favorite wooded trail near her home in Texas.

Her earbuds were in, and she was caught off guard when a man lurking in the woods jumped out to grab her.

She told WTVR all she could think of was getting away and back home to her two sons.

“If I were to be killed senselessly on a trail for somebody's thrill, how bad it would impact their world?!” Cutrona said.

Cutrona believes women should prepare for the worst when they go out to run alone.

After her assault, she invented and patented a new self-defense bra, called “Booby Trap Bras.”

The very day after her assault she sewed a sheath into her sports bra so she could carry a knife for protection.

Cutrona believes women should prepare for the worst when they go out to run alone.

“It had to happen for me to move forward,” Cutrona said. “I was excited that I got away, but I know a lot of women aren't that lucky.”

Her message of safety and empowerment is something Cindy Andrews appreciates. She loves to walk with her kids in the park and worries about them when she's not around.

“Because you never know, want to trust everybody but can't anymore,” Andrew said.

The knife tucks away into the sheath.

That’s what Cutrona and her mother Teresa hope more women will take away from her story.

“It wasn't done out of fear, to live in fear, it was done just to be prepared just in case.”

The pepper spray has a blue dye added to it, to help police detect the attacker.

Within three months of her design, Cutrona began shipping orders.