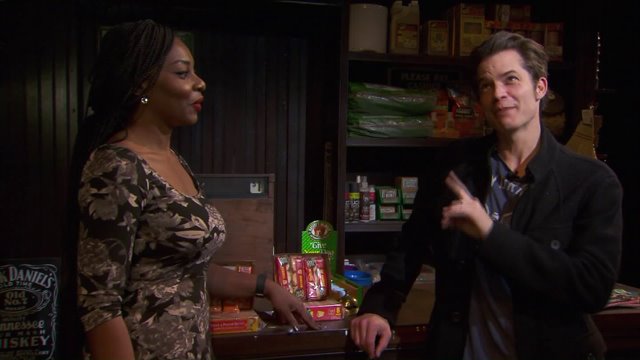 'Justified' fans did not have to wait too long for Timothy Olyphant's next act, especially since the since the series bid its final farewell after six seasons.
Now, the actor is taking his talent back to the stage.

"I read that you haven't been on stage in 20 years," I said to Olyphant. "Yeah, something like that, and I was actually telling my friends the other day, that we go upstate New York sometimes, my in-laws have a place up there and the town has a little community theater and I've done a couple things there," he laughed. "I didn't put it in the playbill, but technically I've done a small part in Hello, Dolly and Bye Bye Birdie. I also did some off-Broadway plays in the late 90s when I used to live here in New York and one of them was here in the Atlantic."

The chance to play 'Strings McCrane' brought him back to the Atlantic Theater Company as a headliner in Hold On to Me Darling.

"He's a singer, he's a country-western singer who crosses over to be a big movie star and his mom has passed away and he returns home for the funeral," Olyphant explained of his character. "He had dreams of working at the local feed store, to have some normalcy in his life"

And if Olyphant gave up Hollywood, what would he want to do?

"I like ice cream, I mean who doesn't, maybe an ice cream truck, I can scoop ice cream," he laughed.

He's got to stay in shape thought for some of his more risque scenes in this play.

"If you accept a job, where you're going to be standing there in your underwear and then the other actor stands there and has to say 'you're in fantastic shape,' there's a certain level of like well, I guess I'm going to to have to go do that," he explained.

Safe to say we are all truly thankful that this star is always working, also recently on TV's 'The Grinder' playing himself.

"They should've paid you more because you're playing yourself," I said to him. "You're right, because at a certain point, who else would these get to play that role."

Web extra: Timothy Olyphant wonders how much he should do for his wife on Mother's Day

And celebrating Mother's Day in the new Gary Marshall comedy.

Hold On to Me Darling  opens today and runs through April 3rd.