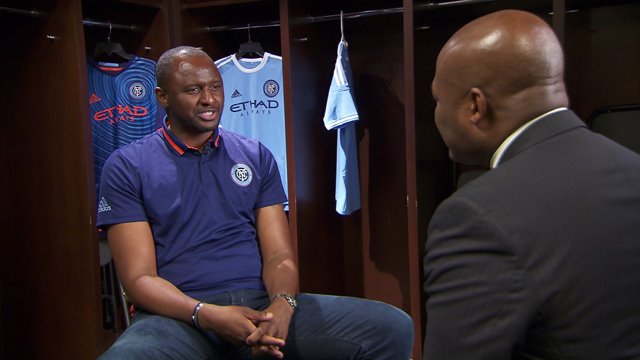 A 4-3 win in the season opener versus Chicago marked the beginning of the Patrick Vieira era as new head coach of New York City Football Club, a team that was gutted last year after its inaugural season.

"I was really pleased in the first game because we played the way the way I was expecting the team to play, we created a lot of chances," Patrick Vieira, head coach, said.

And this is why the club hired Vieira.  This former European midfielder won three Premier league titles and four Football Association Cups.  This is his first major head coaching job but he has a vision for this team to be successful on and off the pitch.

"You have to look after yourself by training, maybe spending more time at home, going to sleep early and looking after what you are eating," Vieira said.

This is music to the ears of Captain and leading scorer David Villa along with U.S. Men's National team member Mix Diskerud.

Web extra: David Villa talks improving from last season and how his family is adjusting to NYC

"We want to be the team that controls the games and plays the most entertaining soccer," Mix Diskerud added.

And Vieira believes his unconventional style of play, which was successful for him as a player will provide an exciting brand of soccer for fans resulting in more wins.

"We are going to play in 4-3-3, I have a clear idea about what is the responsibility of every single player on the field," Vieira said.

"His style is keeping the ball on the ground to try and play soccer in the most beautiful was as possible," Diskerud said of Vieira.

This will be the second year NYCFC will play at Yankee stadium, but the first for Vieira. This native from Senegal grew up hearing about Yankee Stadium and now is excited about playing here.

"Yankee Stadium is worldwide, even in France we heard about that stadium, it's one of the biggest, famous stadiums in the world," Vieira said. " So to play here is privilege."

NYCFC hosts Toronto FC this Sunday for its season home-opener.