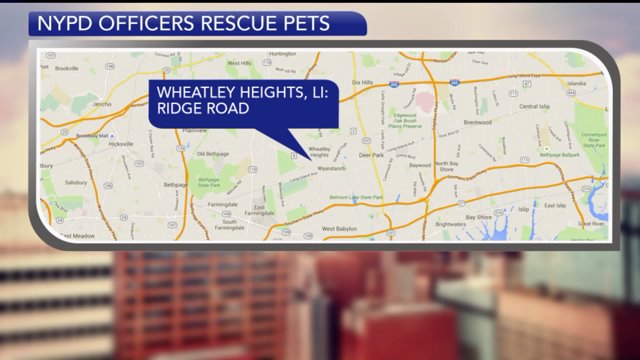 WYANDANCH, N.Y. – A NYPD officer was hurt in a blaze after the cop along with a partner jumped into danger when they saw a home engulfed in flames.

Suffolk County Police Department said the two NYPD officers, who were on-duty, were driving home a surgeon who treated the detective that was shot in Brooklyn during a narcotics bust Tuesday evening.

Once they dropped off the doctor, the two cops saw a house under fire on Ridge Road minutes after midnight Wednesday, police said.

The officers entered the home and found no people inside, but were told pets were trapped inside and went in to try to save them.

One of the officers suffered smoke inhalation while inside the house, according to police. His condition was not immediately known.

One dog found inside the house has died, police said.