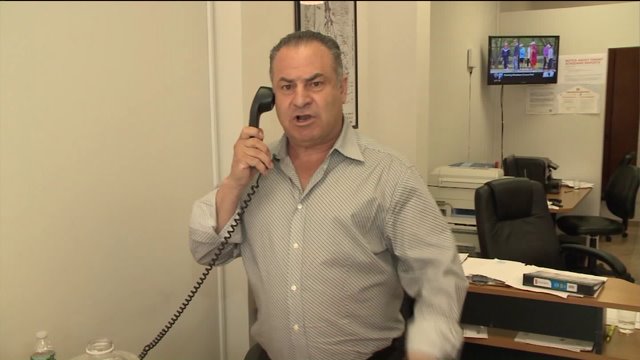 ASTORIA, Queens — Phivos Ioannou, a notorious real estate agent from Astoria First Realty in Queens, is in trouble with the law again.

PIX11 has reported on him before. A few years ago he served federal prison time for identity theft and was stripped of his real estate license. But he continued hustling would-be renters after getting out of prison.

Last May we reported on a young couple, Miguel and Erica, who put $5,000 down for rent and security after Phivos’ son, Dino, showed them a vacant apartment. But it turned out that many others had been shown the same apartment. Miguel and Erica did not get the apartment, or their deposit back. However, after they contacted PIX11, we confronted Phivos and Dino and the realtors agreed to return the $5,000.

Recently, Phivos was arrested after allegedly ripping off a number of other renters from whom he took a combined $13,000 in fees for an apartment in a brand new building on Astoria Boulevard. Each of them was promised the apartment after they paid first and last month’s rent and a broker’s fee. However, none of them got the promised lease or their money back.

As a result, the Queens district attorney investigated Ioannou and he was arraigned on three counts of grand larceny in the third degree and three counts of scheme to defraud in the first degree. Bail was set at $15,000. Ioannou remains in jail awaiting trial. His next court date is March 8.

While that case moves along, another victim has recently come forward. Engeel Zeldon says she gave Phiovs Ioannou $7,200 in cash to rent an apartment on 40th Avenue in Astoria.

Zeldon, the single mother of two children, paid $2,400 each for first and last month’s rent and $2,400 for the broker’s fee. Phivos told her the landlord was out of town in Las Vegas and when he returned a few days later, he would sign the lease and give her the key. But after those few days passed, and Phivos stopped answering the phone, Zeldon went to the office of Astoria First Realty and found it was closed down.

The city marshall had evicted Ioannou for allegedly owing sixmonths rent to the landlord.

Ioannou texted Zeldon, promising to return her money in two days. He never did and she has now added her name to the list of victims on file with the Queens D.A. She and her two daughters are now living temporarily in the Ramada in Astoria, looking for another apartment, while Phivos Ioannou sits in a jail cell.