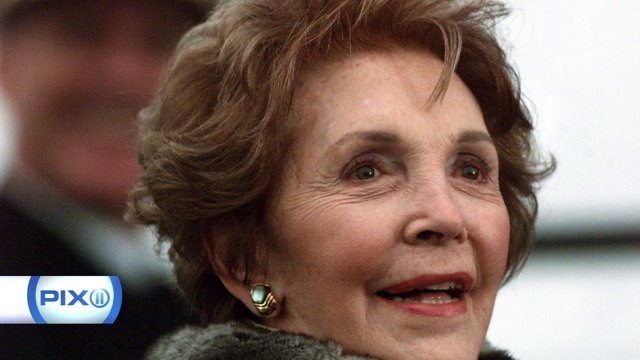 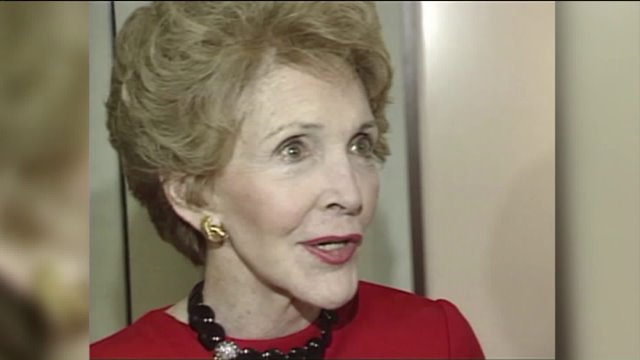 Former first lady Nancy Reagan, who joined her husband on a storybook journey from Hollywood to the White House, died Sunday, according to John Heubusch, executive director of the Ronald Reagan Presidential Library and Foundation.

As first lady during Ronald Reagan's eight years in the White House, she was known as the "Just say no" spokeswoman of anti-drug campaigns, and as a fierce protector of her husband, both personally and politically. When Ronald Reagan was shot in a 1981 assassination attempt, Nancy Reagan never left the hospital where the president was treated until he was released, according to Nancy Reagan's press secretary, Sheila Tate.

After she and her husband left Washington, she became his protector again as he struggled with Alzheimer's disease until his death in 2004.

Her official White House biography quotes her as saying, "My life really began when I married my husband."

Nancy Reagan maintained her political interest -- and stature -- even into the 2012 Republican presidential contest. Her entrance at a September 2011 debate for 2012 Republican hopefuls at the Ronald Reagan Presidential Library in Simi Valley, California, prompted a standing ovation from the audience.

"There are no two greater keepers of the Reagan legacy than Nancy and Michael Reagan," Palin wrote in a post on her Facebook page praising Gingrich's Ronald Reagan connections.

It was at a political event in August 2011, at the library that bears her husband's name, that Nancy Reagan lost her balance and fell, only to be caught by Sen. Marco Rubio before she hit the ground. Rubio, a Florida Republican, was the featured speaker at the event attended by the former first lady.

During the 2008 presidential campaign, she hosted two debates for Republican candidates at the library, according to her biography on the National First Ladies' Library website.

A marriage made in Hollywood

She was born Anne Frances Robbins in New York City on July 6, 1921. Her mother and father separated before her birth.

Her mother, Edith, toured with a theater company while Nancy lived with an aunt and uncle. Her mother married a Chicago neurosurgeon named Loyal Davis when the future first lady was young. He adopted her and she settled down in Chicago, before she adopted the stage name Nancy Davis and headed west to Hollywood to become an actress.

"She told me that MGM was like a big family, that when she signed with MGM, she became part of that family. They took care of her," Tate said.

"She wasn't afraid even at her age to go out there by herself because she was surrounded by people to help her."

As part of the MGM stable, Nancy Davis made 11 films from 1949 until 1956, but her career almost ended before it began. Her name appeared on a list of people thought to have been Communist sympathizers in 1949.

Upset, she turned to a friend for help and he set up a meeting with the president of the Screen Actors Guild, a dashing leading man named Ronald Reagan.

It would be the start of one of Hollywood's and Washington's most enduring love stories. In fact, her final screen appearance was playing opposite her future husband in a movie called "Hellcats of the Navy."

The two wed on March 4, 1952, in a private ceremony at a small church near Los Angeles. She began her role as a wife of a politician when her husband won the 1966 gubernatorial race in the nation's largest state of California.

But many closest to the couple said her adoration for her husband was not an act.

"It was for real, that wasn't an actress, the adoration they had for each other," former White House Chief of Staff Kenneth Duberstein said.

Official statement from the White House

Nancy Reagan once wrote that nothing could prepare you for living in the White House. She was right, of course. But we had a head start, because we were fortunate to benefit from her proud example, and her warm and generous advice.

Our former First Lady redefined the role in her time here. Later, in her long goodbye with President Reagan, she became a voice on behalf of millions of families going through the depleting, aching reality of Alzheimer’s, and took on a new role, as advocate, on behalf of treatments that hold the potential and the promise to improve and save lives.

We offer our sincere condolences to their children, Patti, Ron, and Michael, and to their grandchildren. And we remain grateful for Nancy Reagan's life, thankful for her guidance, and prayerful that she and her beloved husband are together again.

Reagan's two terms as California governor catapulted him into the national spotlight, and he ran for higher office.

Ronald Reagan swept into the White House and when he was inaugurated in 1981, Nancy Reagan brought to Washington a style and elegance that many loved. But she was also criticized for wearing expensive designer gowns and ordering expensive new china for White House state dinners -- even though the place settings were paid for with private funds.

"Nancy Reagan was hurt by it, it bothered her because people didn't understand," Duberstein said. "But the impact was more on him, because 'Somebody was picking on my Nancy.' And that was unfair."

"I think Nancy has no idea about the meanness of politics or that she would ever be criticized for simply making her life all about him," former Reagan aide Michael Deaver said.

She had a sweeping influence on how the White House was run, especially when it came to the people who worked for the president.

And when President Reagan was shot in March 1981, only she and a few others knew how badly hurt he really was.

"I remember sitting in the ante room with her and we were dealing with a few things that had to be dealt with and there was this pounding," Tate said. "And she said: 'They're pounding on his back.' And it was really shocking -- bam, bam -- just to get everything moving ...

"She never left that hospital."

After the assassination attempt, the president's safety was Nancy Reagan's No. 1 preoccupation. She even turned to astrology -- not for herself, aides said later, but for her husband.

"After all, what harm did it do?" Tate said. "People use crutches of various kinds and that seems like one of the least harmful crutches you could use to allay your anxieties."

Later, she was diagnosed with breast cancer in 1987 and underwent a mastectomy.

'I make no apologies'

Through it all, she had many admirers and critics. Chief among them -- her husband's former chief of staff Donald Regan, who wrote a blistering book about her influence, claiming that she used an astrologer to determine the president's schedule.

"I would have preferred it if he decided to attack me," Reagan said at the time. "From what I hear, he's chosen to attack my wife, and I don't look kindly on that at all."

A year after Reagan's final year in office, the first lady fired back in her 1989 book, "My Turn: The Memoirs of Nancy Reagan."

"I make no apologies for telling him what I thought," the former first lady wrote, referring to her husband.

She had other, more traditional roles, at the White House, including a spokeswoman for the anti-drug program -- which was reduced to a phrase, "Just Say No."

"When I said, 'Just say no,' it was an answer to a question by a child in a classroom," she told CNN's Larry King. "Now, I didn't mean that was the whole answer, obviously, but it served a purpose."

After she and her husband left Washington, she became her husband's protector again as he struggled with Alzheimer's disease.

In a 2001 interview which took place on Ronald Reagan's 90th birthday, CNN's Larry King asked the former first lady if she felt that fate had treated her badly.

"No, no. When you balance it all out, I've had a pretty fabulous life," she said.

When her husband died after a 10-year battle with the illness in 2004, she was the focal point of a majestic state funeral.

"Nancy, none of us can take away the sadness you are feeling," then-Vice President Dick Cheney said. "We honor your grace, your own courage and above all, the great love you gave to your husband."

Those closest to the former first lady said they were concerned about her when her husband of 52 years passed away.

"He was the center of her universe," Tate said. "And I think when he died, we worried so much about how she'd hold up. But she always surprised me. Whenever the going got tough, Nancy Reagan did just fine."