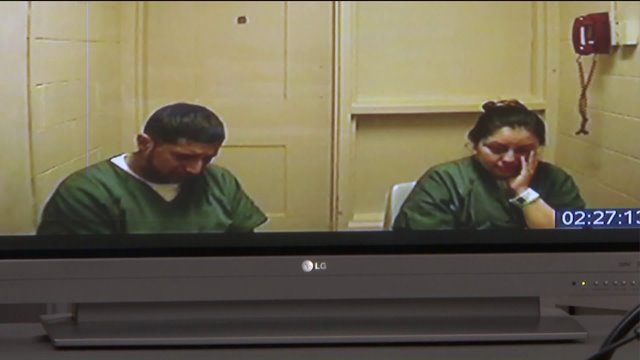 JERSEY CITY, N.J. – The following exchange is what detectives say were the first words of the cover-up following the hit-and-run death of Shayla Pichardo.

DISPATCHER:  911. Where is your emergency?

DISPATCHER:  What is going on sir?

On Wednesday, Fabian Rodriguez, the man allegedly behind the wheel of the Chevy Tahoe along with his girlfriend, Joanna Rosas-Alvarez, who prosecutors say was part of the cover up were hauled before the judge via closed circuit to face a slew of charges.

"As far as him making this phone call that is an allegation at this point," Barnett said.

Barnett addressed the incident and the alleged cover-up after the 33-year-old Rodriguez was held over on 250,000 bail.

"I don't think any of us here know if a phone call was placed," he said.

PIX 11 News obtained the alleged call in question and on the call detectives say the cover-up is clearly evident.

DISPATCHER:  They stole the car? Did they just take it?

RODRIGUEZ: Yeah, she's calling like, like one hour ago but the problem is she no speak English.

Hillside police say that Rodiguez then goes on to list a parking lot along Central Avenue as the location of the theft,

DISPATCHER:  Where was the car taken from?

RODRIGUEZ:  I think outside the parking lot.

DISPATCHER:  Ok, So it was taken from the parking lot there?

DISPATCHER:  But you guys didn't report it when it was taken?

RODRIGUEZ:  No, no, the problem is she call it like before, but I don't know, maybe I, before I call police I want to make sure maybe somebody take it.

The Chevy Tahoe was ultimately located along 17th Avenue in Newark and what detectives told PIX11 that it had its doors locked and it was perfectly parked, which is never the case when they come across a car that has been stolen.

PIX 11 News also has learned that the car had been washed and that police were able to track it down via OnStar GPS.  Additionally, Rodriguez did identify himself at the end of the call by his first name,

DISPATCHER:  What is your name?

Detectives say that Rodriguez made the call because immediately afterwards they sent a patrolman to meet with him at the location he indicated he was at on the 911 call.  It was there that Rodriguez met with the officer, confirmed he called, and provided all the information needed for the police to generate a  stolen vehicle report.

Following Wednesday's arraignment, PIX 11 News caught up with the father of Rosas-Alvarez who informed me that they planned to bail her out.

As for the charges levied against his daughter, the man simply said, "I do not know anything."