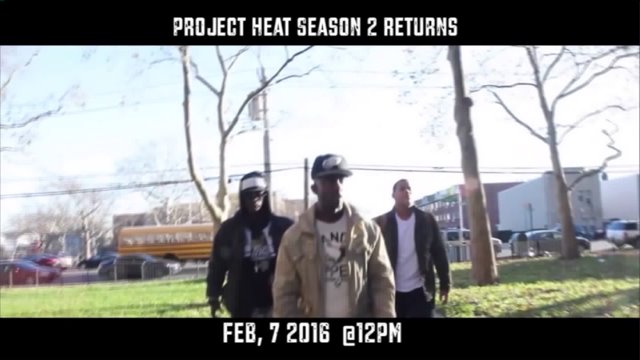 BROOKLYN –– The last time you watched a show about life in East New York Brooklyn, it probably did not look anything like this.

In fact, the “based on a true story” episodes of the web series “Project Heat” are plucked directly from tales of life in the Louis Pink Public Housing development.

What can you expect?

Well you can forget about scenes of young professional "brunchers" - mulling over life and death decisions of whether to get a Tinder headshot.

And Project Heat definitely takes the reality of “The Real World Brooklyn” to a new level.

“I want them to be aware of their surroundings," Dunn said. "But if you’re not from the projects, you can actually get trapped and not make it out.”

“Even if you look it up online, you’ll see these stories that happened. It just didn’t’ start with Akai Gurley. It went back for thirty years. It’s always been happening, that’s why nycha put the camera in the hallway. That’s why they have the vertical patrols for the cops. This is why the cop walked around scarred to death in a hallway, and an unfortunate situation happened,” said Apparicio.

That of course meant covering the fatal shooting of Akai Gurley, which took place inside a dark stairwell, similar to this one, here in the Pink Houses.

In the interest of balance we decided to return to the Pink Houses Community Center, where Assistant Director Gregory Duracell is crafting another story line - with the same characters - at risk youth.

“We struggle with crime every day, but what we’re trying to do is to be role models. To show the difference between what’s right and what’s wrong. These very posters and banners that we have across this gym, let’s you know we’re trying to do something. They don’t get to see that. That doesn’t make the news,” said Duracell.

Project Heat creator Tiffon “Pop” Dunn hopes the series will serve as a cautionary tale adding he realizes there’s a fine line between condemning the guns and violence depicted on screen and glorifying that lifestyle.

“Just because you see all the violence that’s going on...we don’t want the youth to pick up a gun and go out and shoot. That’s not cute. We’re trying to give you a message. If you got dreams, go for it,” said Dunn.