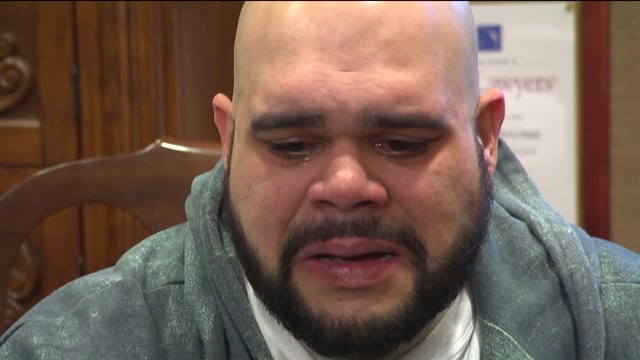 10,000 children every year end up in the emergency room for choking. One child dies every five days.

As a leading cause of accidental death, it’s something our schools face as they feed our children. Now, the American Red Cross has changed the way they teach first aid for choking.  So what would you do if someone starts choking?

Ana Santiago cannot contain her grief.  “To this day all they say is, ‘We tried our best. She choked.’”

It’s the only explanation she’s ever gotten after her seven-year-old daughter Noelia Lisa Echavarria choked to death in a school hallway at PS 250 in Williamsburg.  She was found in a pool of blood, surrounded by school workers.  No one was working on Noelia when her uncle arrived.  An ambulance driver was flagged down on the street outside the school by a frantic worker, but told the Santiagos he couldn’t save little Noelia.  And Noelia is not alone. Dyasha Smith, who has severe autism, also choked to death at her Brooklyn School in October of 2014.

Alex Santiago, the first family member to get to PS 250, is horrified no one gave his niece first aid.  “Nobody was there to help her and she didn’t get oxygen.  And she went brain dead.”

Their attorney Dave Perecman says it’s eerily reminiscent of how school personnel responded when Avonte Oquendo fled his school and wasn’t reported missing for an hour and calls to police were delayed.  “I hate to say it that’s what happened in Avonte’s case. They didn’t call 911 for at least an hour until after he was missing.”

And the Santiago family says that no one at PS250 rendered life saving aid to Noelia.  When asked whether any school personnel used the Heimlich or performed CPR, the family’s attorney said, “We don’t know.  We just don’t know.”

The medical examiner has since ruled Noelia’s death an accident after choking on food. But her family points to an anonymous letter sent to their attorney that the department of education may be fudging personnel training records.

In part it states “Emergency Skills Inc… (is) issuing certifications to staff who did not attend said CPR courses”.  The Department of Education referred us to the City Law Department which did not answer our request for comment.  But the facts are clear, there have been approximately 10 deaths due to choking between 2009 and 2013.  For families, that’s ten lives that could have been saved.

Even more troubling, school workers are trained in the Heimlich maneuver.  But as in Dyasha’s case, it isn’t always a life saver.

Arthur Lih, a Long Island father and inventor points out, “Between 70 to 80% of the time the Heimlich will be effective.”

Even when children survive a choking, ten percent of all cases lead to hospitalized and surgery to have the food removed. In 2010, the most recent year for which statistics have been compiled, 4,700 people died from choking.

Lih was devastated after a fellow dad was traumatized seeing a family lose a child to choking.  Why does he think he could do something that works better than the 40-year-old Heimlich maneuver?

Lih says he hopes to save people from unnecessary choking deaths by inventing the LifeVac.  And he wanted to use simple suction that anyone could figure out to save lives.  It looks like a hybrid of an oxygen mask and a sink plunger.

And most importantly, the Life Vac doesn’t force air into the mouth, which can shove the food deeper,  it only pulls out the lodged object.

“There’s incidents where you can’t be Heimlich-ed. You’re in wheelchair, obese, pregnant.  There are procedures to do it, but it’s very hard for the layperson.  Plus, 30% of the time there is damage: a broken rib, lacerated spleen.  We see this especially in elderly.”

Fire Departments and schools already have them as emergency equipment.  Lih hopes to sell enough at roughly $50 each to use profits to give them away to schools that can’t afford them.  We checked in with the lifesaving crews at the Seaford Fire Department, where they’ve listened to Lih’s position about the Life Vac.

For families that have lost someone to choking, their only hope is that no one has that horror in their own lives.

Noelia’s uncle Alex made an impassioned plea with tears streaming down his face , “You all are the news people. They listen to you more than they listen to us. Help the other kids.  If this happen to us imagine how many other families this happen to.”

The Red Cross has revised its standards for treating someone who is choking.

Attorney Dave Perecman is actively involved in helping children who need additional attention because they are a flight risk.  Senator Chuck Schumer has sponsored a bill to provide federal funding to states and municipalities for GPS type devices for at-risk children.  A petition was started more than a year ago to gather support for the legislation.