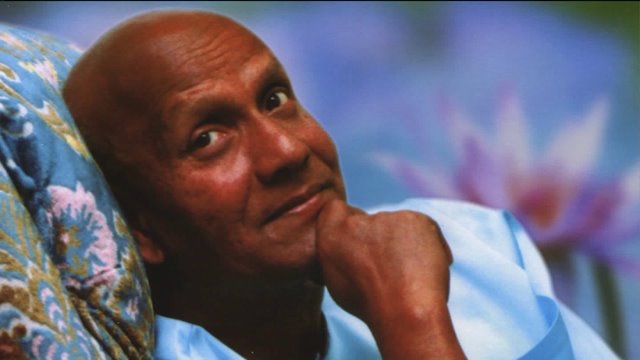 JAMAICA, Queens –– Saroja Douglas joined the Sri Chinmoy Centre 43 years ago, after moving to New York from Sweden, and remains a devoted member of the enclave of followers that still live in Jamaica Hills, Queens—even though their guru—Chinmoy Gumar Ghose—died in 2007 at the age of 76.

“He wanted to teach people they have to go deep within and bring out their good qualities, ” Douglas told PIX11, as she wore a traditional sari and walked the late leader’s dog on 149th Street.

Douglas bristled at memories of press reports that started emerging in 2002, when a number of women who’d left the group claimed Sri Chinmoy didn’t practice what he preached: celibacy.

“I know that he absolutely never abused anybody, in any way,” Douglas insisted.

Douglas told PIX 11 she felt that all over the world “there’s garbage against spiritual groups.”

The Sri Chinmoy Centre calls itself a global community of several thousand followers who are present in over fifty countries.  They run free meditation classes and offer concerts and told PIX 11 the group has a humanitarian organization working in Africa and Asia.  The Queens-based group operates a vegetarian restaurant, Annam Brahmin, on 164th Street and a row of shops on Parsons Boulevard, along with a music center and other classes.

When PIX 11 presented our first report Wednesday—which included interviews with former disciples who recognized a female drifter we’d been reporting on—we were sent a lengthy statement from Sri Chinmoy spokesperson, Dr. Kusimita Pedersen, who told us she joined the organization in 1971 and remains a devout member.

“It is a common stereotype to accuse East Indian religious leaders of somehow leading Western followers morally astray,” Pedersen said in her letter.  Earlier, she had noted, “Our founder and teacher, Sri Chinmoy, led a life of the utmost purity and integrity.”

Another disciple who still lives in the Jamaica Hills community is Sundar Dalton, who was born in Belfast, Northern Ireland.  He is the barber in one of the stores on Parsons Boulevard.

“I’m here 30 years,” Dalton told PIX11, when we visited his shop. “I met the guru in Dublin a long, long time ago,” Dalton added, “and I was interested in that kind of life.”

Dalton is a very youthful 66 years old and told us how his days are structured.

“I swim, I run pretty much every day, I meditate every morning, I try to sing some songs,” Dalton told us.  “Guru was very big on sports and practicing music.”

Dalton has a piano keyboard in his shop and a large poster of the late leader playing tennis in his younger days.  He also has smaller photos that show Sri Chinmoy when he met world figures like Pope John Paul II.

One of the ex-disciples, Gary Falk, told us Sri Chinmoy seemed too focused on getting famous—and that’s why Falk became disenchanted, after spending ten years with the group.

“Guru’s obsessiveness with getting publicity, that was a big thing!  Getting known, becoming famous! Winning the Nobel Prize!,” Falk recalled to PIX11.  “This guy’s supposed to be a spiritual master. What does he care about the Nobel Peace Prize?” Falk asked rhetorically. “Henry Kissinger won the Nobel Prize!”

The Sri Chinmoy Centre spokesperson, Dr. Pedersen, sent us a portion of former Congressman Gary Ackerman’s eulogy for the late guru in 2007.

“He was a personal inspiration to me, “ Ackerman said.  “Each and every one of us has been privileged, because we have been touched by a great master-teacher, a great inspirer, who has given us a message, a message to live by.”

As for Sundar Dalton, he told us he doesn’t make much money in the barber shop, but he is happy with the lifestyle he chose.

“It’s the idea that God exists and by practicing certain yoga, you can make God more real to you,” Dalton said.