2 manholes explode over 20 feet into the air in Elizabeth N.J. 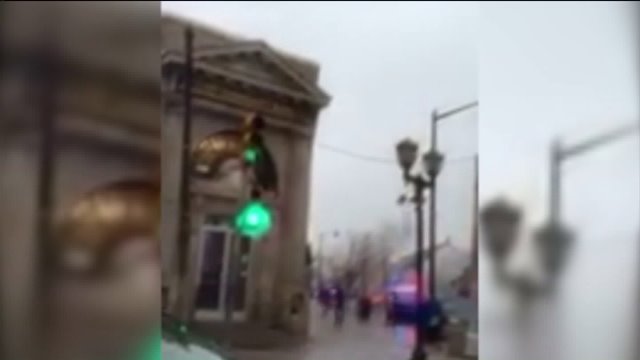 The second manhole that popped came crashing down near two responding firefighters, one of whom was Deputy Elizabeth Fire Chief Lathey Wirkus.

“It definitely startled me for a split second there. Cause it was extremely loud and close by,” said Deputy Chief Wirkus, who estimated he was standing 20 feet away. Luckily the manhole cover flew in the other direction.

Police evacuated around 20 homes and businesses within minutes of the first explosion, including one disabled resident, according to the Deputy Fire Chief.

“I credit them with their quick action getting all the civilians out of the area,” he added.

He said PSE&G cut power to the area within 2 hours of the 2 explosions, which occurred just minutes apart and less than a block away from each other. The fire extinguished itself once the underground wires were not live, said Wirkus.

“It was empty, the street. There was no cars or anything,” said Aviles, who owns Best Buy Auto Parts on the corner near the fire.

Manhole covers in New Jersey typically weigh 175-pounds. That’s their standard weight, as set by the State Department of Transportation.

“The guys close the store, everybody close their stores,” said Arroyo Callisto, a resident in the area.

Some stores remained closed this afternoon. Aviles was forced to evacuate his auto parts shop for 2 hours, a hit to his pocket, he said.

“Because nobody walking right now in the business. Somebody call already, but nobody answer the telephone and we lose our business today,” he said.

Salt brine pushed into the sewers by today’s heavy rain was blamed for the blasts.

“It causes a problem with the cables, actually corrodes them,” said Deputy Chief Wirkus, “We’ve had this before under older infrastructure. They’ve replaced a lot of the cable. We don’t have that problem much anymore, but where it’s older we do get a fire condition. And then the smoke builds up, carbon monoxide is actually what you see exploding, and that’s the pressure that blows the manholes into the air.”

PSE&G said that customers within a one block of the manhole fire were without power.

“As soon as the manhole is properly ventilated our underground department will be able to access if any further damage exists and begin repairs. We expect to restore customers late afternoon,” said Lindsey Puliti, a PSE&G spokeswoman.