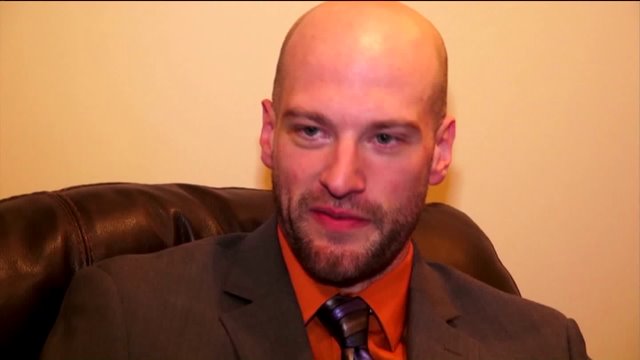 TRENTON, N.J. -- New Jersey corrections officers beaten by inmates say they are suffering doubly because they are not paid a full salary while they recover.

“This was a fight for my life,” said Officer Travis Stevens, a corrections officer inside New Jersey’s only maximum security prison, who says he narrowly escaped after being beaten by two convicted murderers.

Stevens said it all started when he told an inmate that his time was up in the shower. The inmate charged at Stevens, punching him, he said. Another inmate put Stevens in a chokehold and pulled him into his cell, where the officer said help would be slow to find him.

“I thought this was it for me,” he recounted Tuesday, “and I remember thinking, I’m gonna do my damnedest to not go down without fighting.”

He estimated the beating went on for 20-30 seconds before he was able to bite and kick his way out, macing the inmates before running to get help.

Stevens face was still bruised on Tuesday afternoon. The officer said he suffered a concussion and can’t fully lift his right arm because his rotator cuff may have been torn.

Bruised faces are a familiar sight lately, according to the union that represents corrections officers across New Jersey. There are almost 6,000 members in P.B.A. Local 105. President Lance Lopez reported at least 14 assaults by inmates on officers in the past 18 days.

“It appears that it’s been recently more on the rise,” he said.

The union shared pictures of several assaulted officers. Officer Todd Fuester, a father of two, had to have his jaw wired shut for eight weeks after his face was stomped on by an inmate, said Lopez.

“If the inmates don’t believe that there is going to be a penalty for assaulting staff, and there is no retribution for it, then they’re going to continue to assault.”

Lopez said he recently questioned the New Jersey Department of Corrections about whether a recent inmate sanctions policy change may be lifting the rate of inmate assaults on officers.

“We have to figure out and the department has to figure out a way to curb the violence. And what’s upsetting to myself and my members is that my members don’t receive 100 percent of their salaries when they’re injured in the line of duty,” said Lopez.

Officer Stevens estimated he could be out of work for a couple months due to his injuries. During that time, he expects to receive 70 percent of his salary through workers’ compensation. But the union said he is still responsible for paying his share of a health insurance premium while out of work.

“We just feel that they should not have to suffer. After suffering an injury from the institution, they have to suffer in their paychecks when they get home,” said Lopez.

A bill has been introduced in the New Jersey Senate and Assembly that would make corrections officer paychecks whole, while they recover from an injury in the line of duty. Covered injuries would include an inmate assault or a prison riot, said a key sponsor of the bill, Assemblyman Daniel Benson (R-Mercer/Middlesex).

Benson said that full pay while out of work for an injury used to be standard for corrections officers, but the benefit was slashed in 2011 when Governor Chris Christie pushed through pension reform.

“I understand with the job there is a lot of risks,” said Ofc. Stevens, “But the fact that a potential fight or assault on me can happen and it’s gonna financially cost me, it will be like I’m getting a cut in pay just for getting beat up by a bunch of criminals.”

The Department of Corrections told us that all questions about officer assaults must go directly through the Governor’s Office.

A spokesman for Governor Christie refused to provide any information on whether assaults against officers have been on the rise.

“It has been a long standing policy not to comment on pending legislation, regardless of what is said to provoke a response, until a final bill is delivered and we have had adequate time to review it,” said Brian Murray, a spokesman for Governor Christie.

Assemblyman Benson said he plans to push the bill to a hearing before the Law and Public Safety committee soon.