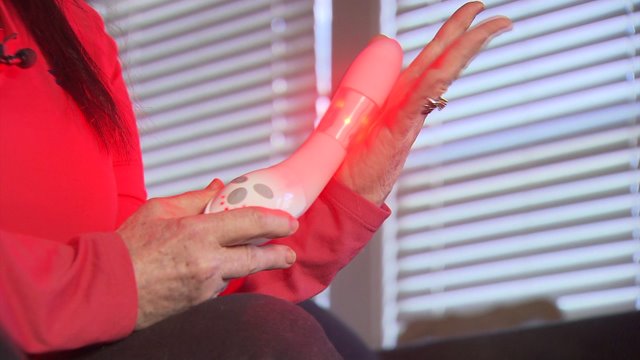 Starting in their 30’s, usually after having children, a third of all women start to develop pelvic support issues.  Once in menopause, it can really take a turn for the worse.  It’s not to be ignored, since currently women should expect to spend a third of their lives in menopause.  Many women suffer in silence, never bringing the issues up to doctors.  But now there is hope.

Celebrities from Whoopi Goldberg to Lisa Rinna are making money selling “absorbent underwear” or adult diapers.  It’s a $1.4 billion business, on track to out sell baby diapers in just four years.  Half of those buying are under 50 years old.

There’s also been a dramatic rise in surgeries to correct stress urinary incontinence and pelvic organ prolapse, but now a massive groundswell of lawsuits is shining a light on just how dangerous those surgeries are.  Linda, we’re not using her last name, is currently suing the maker of her pelvic mesh used in a surgery to correct her problems.

“I no longer can have sexual intercourse,” she explains. “I’m angry.” Her attorney Adam Slater says like most other lawyers involved in these suits that there are tens of thousands of women who are currently suing a variety of pharmaceutical and surgical device companies.  Most have the same complaints.

Slater shows me a kit like the one used inside Linda’s pelvis.  He points out the “massive amount of polypropylene, what they make your garden hose out of” that’s used.  It forms scars tissue, hardens, and becomes like “concrete” once inside a woman.  It was never even initially FDA approved, instead it was allowed to be used since it was already being used in abdominal surgeries.

Attorneys point out a woman’s pelvis and vaginal area is a much more dynamic area than the abdominal wall.  Some of the judgments have already come in at in excess of $10 million. “It’s a life-long daily catastrophe when it goes bad.  It hardens and erodes, it causes pain and it moves, starts to extrude through a woman’s body.  It leaves women with the inability to have sexual relations with any sort of pleasure.”

While the FDA has now ordered recalls and safety studies of these mesh products, which will take years, there are other ways women are taking back their lives back “south of the border.”

Dr. John Paciuc is using the “MonaLisa” laser on his patients to reclaim their sex lives.  One of his patients, Margaret, developed debilitating symptoms after breast cancer treatment.  It also left her unable to use traditional estrogen based medicines.

“I was really in pain and uncomfortable and something had to happen.  Sex was off the table.  It hurt too much. It was awful.”  Dr. Paciuc used the Mona Lisa on Margaret.  It uses the same laser as one already used to rejuvenate facial skin.  It’s been shown to bring vaginal tissue back to its younger state.  How?  “By producing collagen and elastin, new blood vessels again.  And then vaginal health is restored.  This is going to be a huge game changer.”

Still other women are using an at home treatment called the VSculpt. Lorin, a mom of four who loves to run and play soccer, found herself having to line her shorts anytime she wanted to run.  It was not how she wanted to live.  “Did it bring you back to your pre baby years?” this reporter asked.  “I would say very close!” Lorin enthusiastically answered.

Dr. Donnica Moore, the medical director for VSculpt explains it this way.  “It’s toning the muscles of the pelvic floor.  An overwhelming majority of women report improved symptoms in 30-60 days.”

Another woman who tested the Vsculpt said she was taken twenty years back in time.  Belle Gayer went in to menopause at just 45, and didn’t want to give up on her sex life.  But, “I didn’t feel safe going the chemical cream or pill route after.”

“It’s not just me.  It’s not just one woman.  When it makes you feel better physically and emotionally and helps your relationship, how can you beat it?”