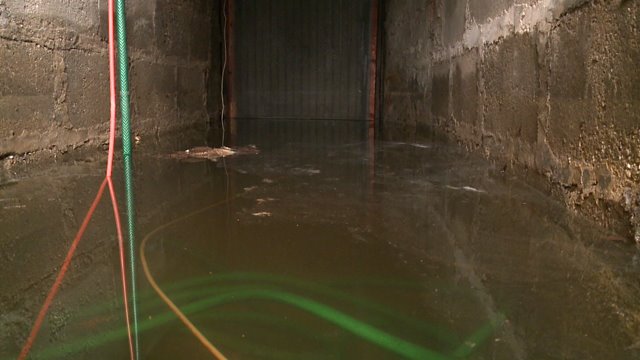 WESTCHESTER SQUARE, The Bronx -- It's safe to say that the last thing anyone wants is worry. That may be exponentially true for someone who's a century old.

However, worry has come in an unsuspecting way for a homeowner here after her basement flooded because of a leaking plumbing system in the abandoned house next to hers.

"It looks like a tornado hit the place," said Fanny Lama as she walked through her finished basement. Its floor is a wet, squishy, slippery mess.

"It was coming in faster than the sump pump could take it out," said the woman who's 99 years and 11 months old, describing the water that kept rising in her basement Monday through Thursday, and which has left everything in the lived-in cellar a soggy waste to the woman who'll turn 100 next month.

In front of her home on Poplar Street, the gutter had a deep and wide sheet of ice. It extends to the house next door, which has sat empty since 2014, according to Lama's family and their neighbors.

Cascading down the far wall of the house next door are 15-foot long, 3-inch thick icicles. All of the ice on a cold Friday gives a strong indication of what went wrong here.

"Water from the bathroom pipe broke," said Joseph Lama, 72, Fanny Lama's son. "It leaked down into the basement."

He then showed PIX11 News what the result of possibly five days of water leakage looks like. He opened up the cellar door of the foreclosed home next door to show that the crawl space underneath was filed with close to three feet of water.

"All the way to the front of the house," Joseph Lama said is as far as the flood extends, after apparently building up from at least Monday to Thursday night.

That's when the New York City Department of Environmental Protection dug under the blacktop of Poplar Street, shutting off the water supply to the empty home.

It, according to the Department of Finance, is owned by PHH Mortgage Corporation of
Mount Laurel, New Jersey.

She and her son said that they just want to know the situation has been resolved in time for Ms. Lama's 100th birthday. It's on March 7.