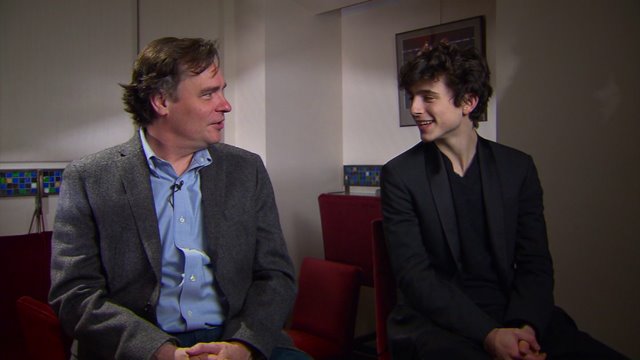 In this week`s Backstage on Broadway, PIX11 talks with the stars of the off-Broadway play, `Prodigal Son.`

"Every night I’m up there it’s really therapeutic for me, my demons, and stuff I'm going through every day," Timothée Chalamet explained. "So when you come see this play, it's like welcome to therapy."

You probably recognize Timothée Chalamet from hits like 'Interstellar' and 'Homeland,' but now this rising young star has turned his focus to the stage. He plays Jim Quinn, a blue-collar kid from the Bronx who lands at a New Hampshire prep school in Prodigal Son.

"I don’t think he is ever met anyone quite like him," Robert Sean Leonard said. "You don’t hear many 17-year-olds say, I wish I had known Plato or Socrates so for a teacher to hear that is pretty cool."

"I don’t know anything about prep schools except that I played a kid in one once in a movie," he said. "I think it’s a lonely place."

Playwright and Oscar winner John Patrick Shanley based the show on his own school days.

As for the star of the show, Chalamet is getting schooled in a different way.

"When I got homeland  it definitely felt like a step up the ladder," he explained. "A play like this I'm in eight of the 10 scenes and I'm using every muscle, every bone and  I can’t take any days off , this feels like the real training ground."

He grew up in a family of performers, but didn't catch the acting bug at home.

"I saw a play called 'Ghetto Clown' that John Leguizamo was in, and it was like a revelation for me," Chalamet remembered.

Now, this up and coming actor is making a big impression of his own.