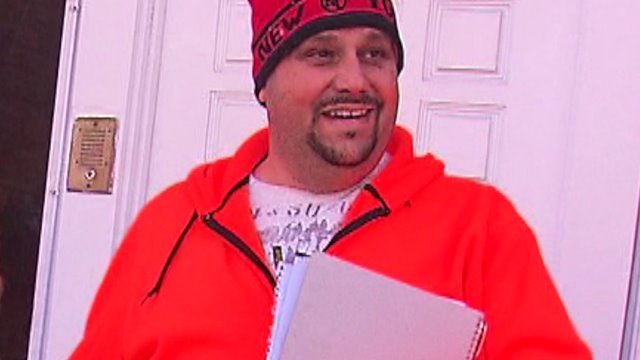 Joseph Battaglia claimed to be a licensed home improvement contractor when Virginia James hired him to renovate her small bathroom and replace a number of doors in her Queens home.

But a spokesperson for the New York City Department of Consumer Affairs  says “Battaglia and Sons Contracting license was revoked in 2013.” His new company, JAB Home Improvement, is also “not licensed” and is “under investigation,” says the Consumer Affairs Department.

We recently confronted Battaglia  about a court judgment he lost to Virginia James for $4854.00 for failing to complete the bathroom renovations and not delivering the replacement doors.

“How come you haven’t paid the judgment?” I asked Battaglia. He claimed to be unaware the court case had taken  place six months ago and that he lost by default when he failed to show up.

“You take advantage of the elderly. My mother was 80-years-old”, said Eileen James.  It was Eileen’s mother who sued Battaglia.  Tragically, she died just one week after filing suit, and  Eileen continued the court fight on her mother’s behalf. “He made commitments to me that he was going to refund the money and fix what needed to be fixed. And of course, months went on. He never did anything”, said Eileen.

She called PIX11 Investigates and arranged to have Battaglia come to a particular address in Queens where we were waiting to speak with him.  “Mr. Battaglia, do you have a license?, I asked him. “Yes, I do. I had one” replied. “You had one  but you don’t have one anymore?  I asked.  “No.”   “People are always suspicious  of contractors, home improvement contractors, and it’s because of guys like you, “ I said.

“No, it has nothing to do with guys like me. I’m a good guy,” he said. “I try to take care of everybody.” He said he was ready to do the right thing and pay the judgment.  “I’m making an arrangement to pay Eileen. We’ll take care of the $4,854.00. But I want you to know I didn’t look to beat anybody, didn’t look to hurt anybody.”  “But you did”, said Eileen.

At first Battaglia said he’d pay within a week.  Then he changed his story and said he’ll pay  when he get his income tax refund, which he claims should be soon. We shall see.

In the meantime, the Consumer Affairs Department says you should always check out a  home improvement contractor before signing any documents or paying any money in advance.  Just calling 311 will get you the information you need.