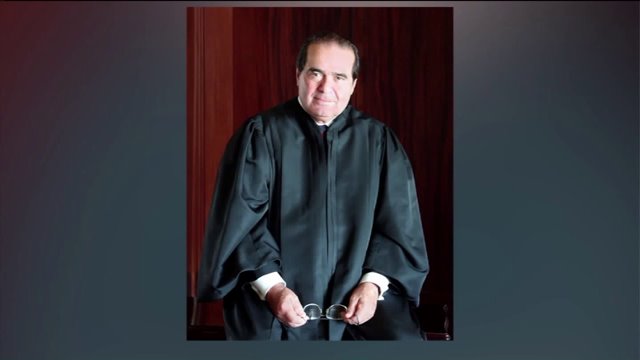 My San Antonio reports Scalia, 79, was a guest at a party at the Cibolo Creek Ranch in Marfa when he reportedly died in his sleep.

"Justice Antonin Scalia was a man of God, a patriot and an unwavering defender of the written Constitution and the rule of Law," said Abbott. "We mourn his passing."

Scalia was nominated to the U.S. Supreme Court in 1986 by President Ronald Reagan.

The White House released a statement following the announcement.

"The President and First lady extend their deepest condolences to Justice Scalia's family."

The first Italian-American to sit on the nation's highest court, Scalia was a conservative in thought, but not in personality.

The jaunty jurist was able to light up, or ignite, a room with his often brash demeanor and wicked sense of humor, grounded always in a profound respect for American law and its constitutional traditions.

"What can I say," was a favorite phrase of the man colleagues knew as "Nino." As it turned out, quite a lot.

"And even in his early years of the Court, that came out at oral argument when he was the most aggressive questioner. And behind the scenes, where the memos he would write-- what were called 'Ninograms'-- inside the court had a real galvanizing effect on the debate among the justices."

A sharp mind combined with a sharp pen allowed Scalia to make his point, both to the pleasure and disappointment of his colleagues and the public.

"He could be belligerent, he was obviously very candid about he felt about things," said Joan Biskupic, a USA Today reporter who wrote a biography of Scalia. "He loved to call it as he saw it, completely not politically correct. In fact, he prided himself on not being PC on the bench in court."

His New York and Mediterranean roots -- "I'm an Italian from Queens" he was fond of saying-- helped fashion a love of words and debate, combining street smarts with a well-calculated conservative view of the law and its limits on society.

"He was very good with audiences that weren't predisposed to like him," said Paul Clement, a former Scalia law clerk. "He was incredibly disarming and charming in his own way."