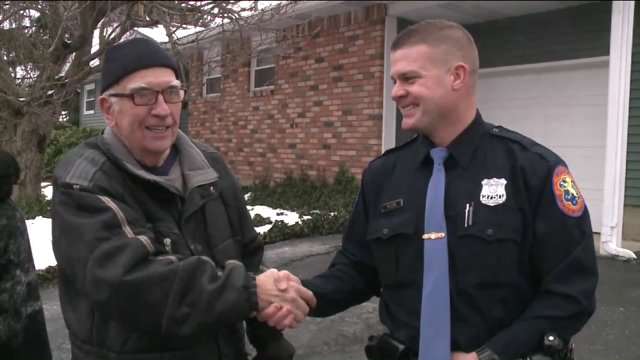 FARMINGDALE, N.Y. — For 82-year-old Gerard Cote any help he can get these days especially when it comes to shoveling snow outside his Farmingdale home, is welcomed.

“You know, old guys like me you never know you can slip,” he told PIX11 News. “I take my time, I don’t play Godzilla out there.”

A few days ago when a passing storm dumped half a foot of snow on Nassau County, Cote found himself in a pickle.

Passing plows buried his driveway right after he had cleared it with a snowblower hours earlier.

“A good Samaritan stopped by and said listen let me give you a hand,” Cote recalled.

That good Samaritan was Nassau County Police Officer Kyle Klein who was in the neighborhood responding to an earlier call of a man who went into cardiac arrest while shoveling.

Officer Klein got right to work, clearing out Cote’s driveway.

A neighbor captured the moment in a photo.

“I didn’t want that same scenario of what we just left where as he is shoveling snow the chances of him having a heart attack,” Klein told reporters Wednesday. “I didn’t need that to happen.”

“So for the ten minutes of shoveling snow it was worth it.”

According to Cote, Officer Klein is welcomed back for the next snow storm.

The random act of kindness was shared across social media, putting Officer Klein in the limelight for an act he said happens every day.

“I was just the lucky one where I guess I was on photo shoveling snow,” he said. “Whether it’s this whether, it’s changing someone’s tire on the road or helping someone get a raccoon out of their house – stuff like this happens everyday.”

“I guess I was the lucky one to have the picture [taken] I guess.”