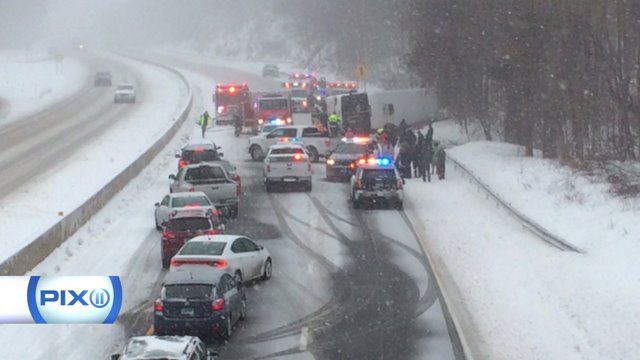 The crash happened about 12:30 p.m. near Exit 61 in the coastal town of Madison. Officials say the bus, owned by Dahlia Inc., and operated by VMC East Coast, was heading for the Mohegan Sun casino in Uncasville.

A spokesperson for Mohegan Sun says all other buses were rerouted and are returning to New York City until weather conditions improve.

Images from the scene show the bus on its side, nearly perpendicular to the highway. Multiple ambulances responded to the scene and rushed patients to Yale-New Haven Hospital.   Hospital officials say four people were in critical condition while 30 people were able to leave. The rest were transported to area hospitals.

Snow was falling at the time of the crash and the highway appeared to be coated with a layer of powder. The snowstorm is expected to drop up to a foot of snow on parts of the state.

The uninjured passengers were taken to Madison Town Campus where the Red Cross assisted them.

Governor Dannel Malloy issued a statement regarding the accident:

“We continue to monitor the situation closely and receive updates in real-time.  Public safety is our top priority and our office continues to work with state agencies and emergency management officials to that end.  Our thoughts are with those who are injured, and we extend our gratitude to the first responders who are working to protect the safety of all those involved. We urge all those who must travel to use added caution, allow extra time to travel, and reduce speeds as conditions warrant.”