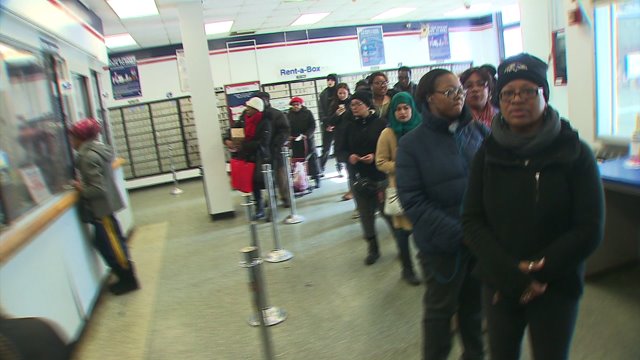 WILLIAMSBRIDGE, The Bronx — The email we received from Tony Williams in the Bronx complained that his local post office lost two of his packages in a month.

Even worse, when he went to the Williamsbridge Station on Gun Hill Road to look for his packages, he said it took him an hour of standing on line to get to the customer service window. That was followed by another 45 minutes of them searching for his packages, only to be told they could not find them.

In his email, Tony Williams included pages of complaints from the Internet about the Williamsbridge Station. According to one review, the station “could easily be the slowest, dirtiest, and worst managed post office in the entire country.”  Others said “it’s disgusting” and this post office “gets an F--."

PIX11 went into the Williamsbridge Station and heard the same complaints that we read on the internet.  “It’s very slow, very congested,” said one woman on line.

“There’s no one to guide you in the direction you should be going. Because this line is actually for pickup but there is nothing to really tell you that. Some people are not picking up a package. They want to send one off, but there’s no way of knowing that until it’s too late. You get there and find out you’re in the wrong line.

Another woman complained “I was standing here like for an hour or something just to get some stamps, postage stamps, until I get all the way up to the front and it was like get back on this line, which is postage stamps.”

One man standing at the pick-up packages window said service “generally is terrible. This is like the fifth time I’m going through this. My package never comes. Despite the long lines, there were a number of customer service windows empty. It’s no wonder not many people leave this post office with a smile on their face.  “I’ve been here since 11:45 a.m.," said one woman who was coming out the door at 1:15 p.m. “This is horrible. This has been like this all last month and this month and it’s a shame."

Some customers blamed the slow pace of the workers while other blamed the managers. I was told the general manager, Shanell Cordero, was at a meeting.  I was given a number that I tried calling many times over the next few days, but never got an answer.

One man, who appeared to be an assistant manager, asked us to leave, but admitted they get a lot of customer complaints. “We’re trying, we’re trying,” he said. “It’s a big station. We get a lot of packages. We are a little short handed.”  We tried to get a comment from the public relations representative for the USPS, Connie Chirichella, but she failed to return any of our calls.