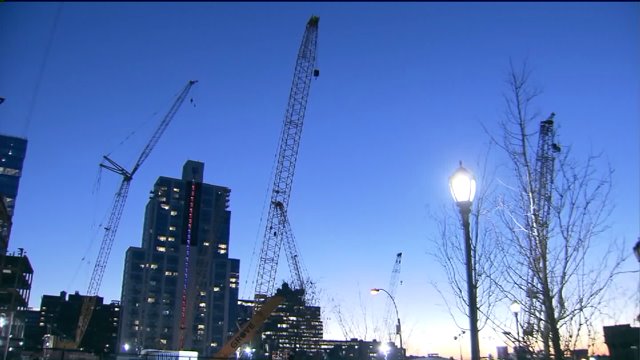 TRIBECA, Manhattan — New York has pages of regulations related to cranes. As required, an inspector was on the scene as the Worth Street crane was being secured right before its crash Friday morning.

The investigation could continue for weeks, officials announced Saturday, one-day after the collapse that killed an Upper West Side man and injured three other people.

The owner of the crane, the Bay Crane Company, and its operator, Galasso Transportation and Logistics, have not commented.

Mayor Bill de Blasio said the crane was being moved into a secure position because of recommendations from the manufacturer’s instructions when winds top 20 miles an hour.

"But this particular company, the instructions were that the crane should be put in a secure position if the winds were approaching 25 miles per hour," the mayor said, "as lower than the typical standard for cranes – but for this company that was there standard."

The city inspected the crane on the morning before the crash as well.

According to the mayor's comments, this was a "crawler crane," not the largest type, but also required to be registered with the Department of Buildings (DOB).

"But we’re instructing, right now, all 376 crawler cranes to be secured – whatever is the most secure position for them in a wind condition," de Blasio said on Friday. "They’ve all been ordered to be secured immediately. In addition, the 43 tower cranes, the larger cranes in the city, have all been ordered to go into a secure position immediately."

Tower cranes were allowed back into service on Saturday after a one-day suspension.

New York Comptroller Scott Stringer says the collapse could have been prevented. City council members will also be reviewing the results of the investigation. Helen Rosenthal, who represents the Upper West Side, wants to know why the area was not completely clear of pedestrians and people.

"Was it an electronic problem? Was it a hydraulic problem?" asked Joe Sage, a structural architect who has worked scenes of construction calamities, including crane collapses, and is familiar with the protocols of construction-accident investigations.

"The boom was moving too fast," Sage told PIX11 News, "so the hinge at the bottom [of it] was rotating too quickly."

Because the potential dangers are so great, the city required a buildings department employee to be on hand at the scene Friday, before anything went wrong. Workers on the site were trying to lower the crane into a safer position from high winds when the crane gave way.

The city employee, working with other construction workers on site, had ordered people to clear the area in case something would go wrong.

"It tells me they were looking at the weather patterns and planning for this," construction attorney Stephen Murphy said. "They were trying to do the best they could to keep people safe."

So the situation could have been worse, Murphy pointed out.

However, it might have been prevented altogether if the buildings department had done its overall job better,  Stringer suggested.

"There was a study commissioned In 2008," Stringer told PIX11 News, in which the city recommended that the Department of Buildings implement 65 new safety protocols. Of those, said Stringer, "they implemented only eight."

He also said that the safety protocols that were implemented were among the least effective.

One of the most effective, Stringer told PIX11 News, was a detailed walkthrough of a construction site by a DOB safety officer with a construction site's manager before any building project began. Stringer said the reason the DOB and contractors cited for not making that mandatory was that it slowed construction schedules, even though the walkthroughs would take one or two days, depending on the size of the project.