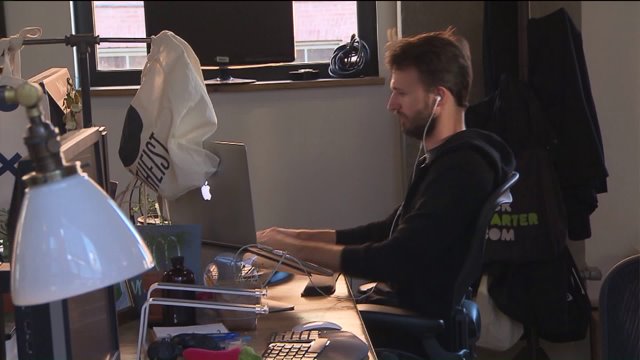 It's almost time for the Oscars and this year, two nominated films were created and funded on the highly popular crowd-funding site, Kickstarter.

Anomolisa is up against Disney Pixar films in the Best Animated Feature category.

But in 2012, it was just an idea with a shoestring budget until thousands of dollars poured in on Kickstarter.

"People are able to support the kind of projects they want to see in the world," says Global Communications Director Julie Wood.  "People are raising money for new creative work.  Anything from food to work to games, even books."

Basically, if you have ever had an idea for a creative project, but did not have the money to fund it -- Kickstarter allows you to ask the world to weigh in and help fund your idea.

All you have to do is name your idea, set a monetary goal and a deadline to raise the money by. However, there is a catch.

If you don't meet your fundraising goal by the deadline, then no money changes hands and your project dies.

Kickstarter began in 2009 and since then 2.2 billion dollars have been pledged in projects.

So, PIX11 set out to find where exactly your money is going. Kickstarter's headquarters are in an old pencil factory in the heart of Brooklyn.

It's a multi-level office space that is extremely unique -- but, it's something you are helping pay for.

"We have a simple business model," says Wood. " We take a 5% fee on successfully funded projects."

Nearly 100,000 projects have been successful - but like any idea, there is that risk of failure.

However, failure was not an option for David Weiner, who quit his job for a dream -- bicycles. Priority Bicycles started with an idea, then a prototype right on Kickstarter.

That helped lead to a physical store in TriBeCa for something called a low maintenance bike -- no fuss, no hassle, just ride.

"By using a belt drive instead of a chain, not only is there no grease - but it lasts three times longer," says Weiner.

So creative thinkers out there, dare to dream.