One year after Valhalla Metro-North crash: ‘If I hadn’t ducked, I don’t think I’d be here’ 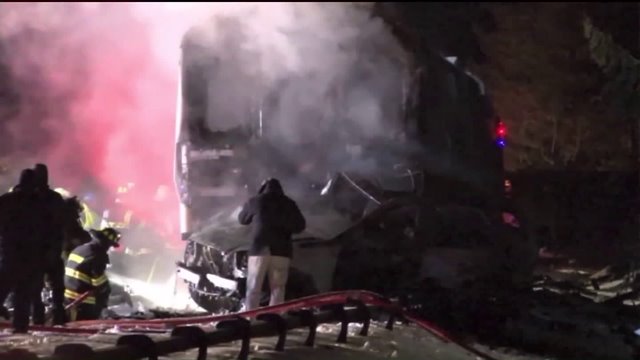 VALHALLA, N.Y. -- When one has a second chance on life, how do you live it?

Brian Stempel offered up the following response, "Gratefully. It really does make you appreciate everything good and bad."

Stempel is one of those rare people in life who saw plenty of sunshine on this rainy February day. The 44-year-old is alive out of good fortune as well as instinct, "If l hadn't ducked, I don't think I'd be here."

Stempel is a survivor of the deadliest crash in Metro North history. The crash at Valhalla one year ago Wednesday.

"It has been a journey for me, it's continuing, but it has been a wake-up call in a lot of ways," Stempel said.

Stempel agreed to meet with PIX11 News and share what he experienced that night after his train collided with an SUV on the tracks, and after he ducked.

"When I stood back up, there was a third rail right around where my head was and the third rail had hit the passenger behind me and it was clear he was gone," Stempel said.

Stempel admits he was euphoric that he survived the first week. Then broke down the next. The rest has been filled with highs and lows, but in the year that has followed, he has never visited the infamous Commerce Street crossing,

"Haven't gone physically to the crossing," Stempel said. "I see it often enough and I typically look at it on one side or the other when I'm on the train."

With regards to the investigation, Stempel did confirm to PIX11 News that there were some initial challenges with the NTSB after he emailed them, "I didn't here back." He eventually connected with someone after a fellow passenger provided the name of someone at the agency.

PIX11 News reported on the challenges of some survivors connecting with the agency last May. The one highlighted, who had exited the train while on fire, shared an email he sent to the NTSB from his hospital as well as phone records of him trying to get in contact with the agency.

The NTSB sent us the following statement last May:

"One of the NTSB's goals in the Valhalla accident is to understand what happened in the first car of the train. Passenger interviews are part of that effort and are ongoing. The investigation is continuing and we expect additional passengers to be interviewed."

PIX11 News has learned that the NTSB has not followed through with that passenger and there appears to be others according to noted transportation attorney Andrew Maloney, who said there is no excuse for the lack of contact with those who survived the inferno of the first car.

The NTSB did email PIX11 News the following statement today with regards to having not contacted a passenger who directly reached out to the agency on various occasions.

A spokesman provided the following:

"The investigation is still ongoing. That said, investigators have interviewed many people in relation to the accident and believe they have the information they need from witness accounts."

As for changes at the crossing? Stempel says it appears to be the same as it was a year ago, "To my knowledge nothing has changed at that crossing. Which is a little surprising."

Additionally, the firm representing the widow of the driver of the SUV that collided with the train acknowledged to PIX11 News that their client, Alan Brody, has filed a lawsuit against the MTA.

When PIX11 News first spoke with Brody last spring, he described the crossing as a "death trap."