In Queens, ghosts of blizzards past, as PIX11 visits 218 Place and Mayor talks plows 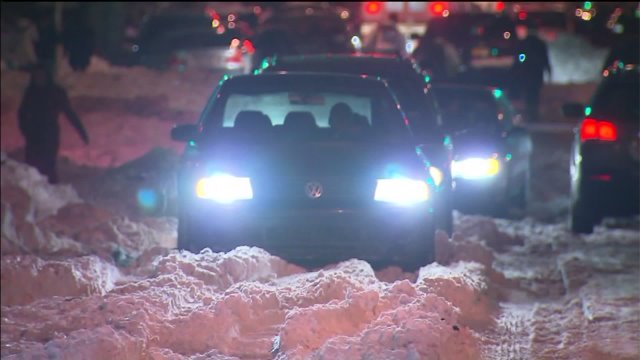 QUEENS VILLAGE— When Kas Burkitt Velez of 218th Place in Queens Village contacted PIX 11 News, by way of yours truly on Facebook, we wanted to see if her block got any “plow action”—after we posted her plight on PIX 11’s Facebook page and pix11.com.

Burkitt Velez had written, “Please help us in Queens Village. 218th Place still not plowed, 89 to 93”—a reference to the stretch of street between 89th and 93rd Avenues.  Burkitt Velez knew I was familiar with Queens Village, since I attended Our Lady of Lourdes grammar school with her.

Overnight—from Sunday into Monday—a Morning News crew stopped by 218th Place and noted that heavy, Department of Sanitation trucks had finally created passage on the block.

“It’s the only way you get anything,”  Richie Velez, Kas’ husband, told PIX 11 News, when we paid a second visit to 218th Place, later Monday morning.  “The squeaky wheel gets the oil.”

Burkitt Velez’s Facebook appeal also got action from another childhood friend, Jeannie Kircher, who contacted an acquaintance working for the city’s Sanitation Department.

The social media campaign was proof again how citizens now rely on digital outreach to get things done.  The PIX 11 Facebook page was also flooded with photos from other parts of Queens—and from New Jersey, as well—offering visual proof of the delay in getting plows to the streets.

When Mayor Bill deBlasio held a storm briefing on Monday, he was asked why Queens seems to historically suffer with snow removal operations.

“We’re talking about a borough of 2.3 million people,” the Mayor observed, covering “the biggest geographical area.”

The Mayor pointed out that some Queens communities, like Astoria, Long Island City, and Flushing, seemed to be in pretty good shape, when he visited.  Others, like Woodside and Corona, were still waiting for assistance.

“Queens has far more equipment than any other borough, starting out any storm” said New York City’s Sanitation Commissioner, Kathryn Garcia.  She said 740 pieces of equipment went to Queens before the storm and, now that major roads and highways were cleared in the city, half the city equipment was earmarked for Queens.  Garcia said more than 170 front-end loaders were available to help Queens.

The epic blizzard, # 2 on the list of major, New York City snowfalls in modern history, dumped more than 30 inches of snow at John F. Kennedy Airport in Queens.  That means two and a half feet!

The storm and its aftermath brought up comparisons to the 1969 blizzard that nearly sank Mayor John Lindsay’s hopes for re-election.  Lindsay was hit with ice balls, when he finally ventured to the outer borough.  It took a week for snow plows to get to certain sections of Queens, especially the eastern end of the borough.  Lindsay got re-elected, but his storm response is part of New York City lore.

Back on Christmas Weekend 2010, city officials were caught off guard by the Sunday into Monday blizzard that started on December 26 that year.

Then-Mayor Michael Bloomberg was not in town, when it became evident the storm system was greater than anticipated.

Some city managers that would normally oversee preparations in Bloomberg’s absence had taken the Sunday after Christmas off, as a holiday.

There was no “snow emergency” declared, so vehicles were still on the road during the storm, which dumped 20 inches of white stuff.

Mayor Bloomberg got back to town quickly, but there were problems with buses and ambulances getting stuck, because of other vehicles marooned in the snow piles.

At a December 27, 2010 press conference, Mayor Bloomberg said, “We will get to everybody and we certainly concentrate on the main streets first.”

Now, another blizzard for the ages, with many people in Queens struggling to get out of their driveways and parking spots.

On 218th Place, though, residents were happy to see PIX `11 come by a second time on Monday.

And Kas Burkitt Velez posted on Facebook again, giving a shout-out to a fellow student from Our Lady of Lourdes.

“Thanks to the work of Mary Murphy, our block got plowed,” she wrote.  “Here is a girl who never forgets Queens Village.  Tune in tonight, as she taped in our block.  Thank you very much Mary, WPIX 11.”