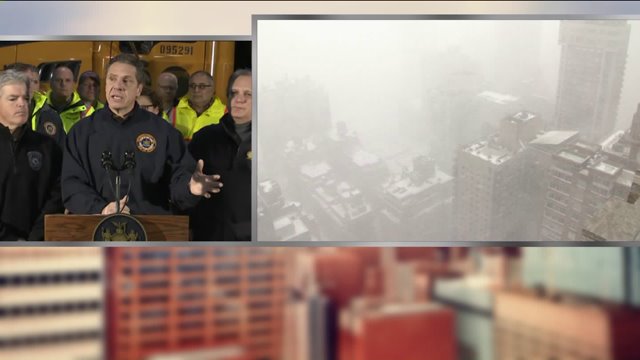 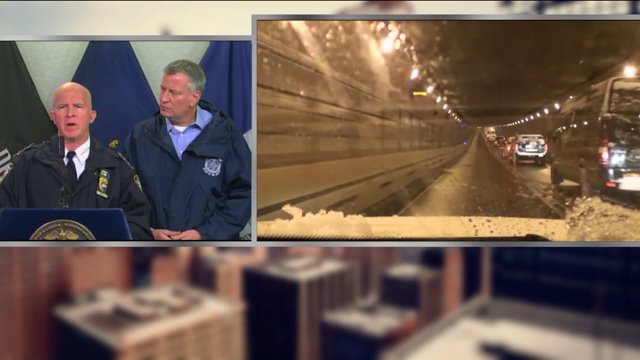 “The travel ban issued earlier today allowed emergency teams to make significant progress in clearing the roads,” Governor Cuomo said. “As crews continue to respond to the storm and the severity of weather conditions decrease, we are lifting the travel ban so New Yorkers can resume their daily routines. Public safety is of paramount importance and we encourage New Yorkers to continue exercising caution while traveling.”

The travel ban on roads, which included Port Authority bridges and tunnels will all be lifted in the morning.

MTA buses will also resume operation as of 7 a.m. and subway service will continue.

Metro-North and LIRR service will be assessed overnight and in the morning, and the state hopes to make a decision by 6 a.m. Sunday, on whether to resume operation. PATH trains will continue to run on a limited weekend schedule.

"Plows just can't keep up with this snow," Cuomo said as he initiated the ban, which began at 2:30 p.m.

Snowfall has been falling at a pace of about 3 inches per hour, testing the limits of city plows and their drivers, he said.

STAY SAFE AND INFORMED: GET THE PIX11 NEWS APP FOR BLIZZARD WEATHER ALERTS AND MORE

Anyone in violation of the ban will still be pulled over, until 7 a.m., and is subject to arrest, NYPD Chief of Department James O'Neill said.

A travel ban refers to vehicles and roadways, not public transit, though the weather has initiated several changes and closures to mass transit.

All MTA weekend work has been canceled, including this weekend's planned 7 train suspensions.

Snowfall totals in the city have reached 25.1 inches in Central Park. The National Weather Service is predicting 24 to 30 inches for parts of New York and New Jersey.

The blizzard slammed into the city Friday evening, hours earlier than expected.

"This is bad and it's getting worse rapidly," de Blasio said, calling this system "one of the worst storms in New York City history" and urging everyone off the streets.

The mayor said the best decision anyone can make is to stay home and stay off the roads.