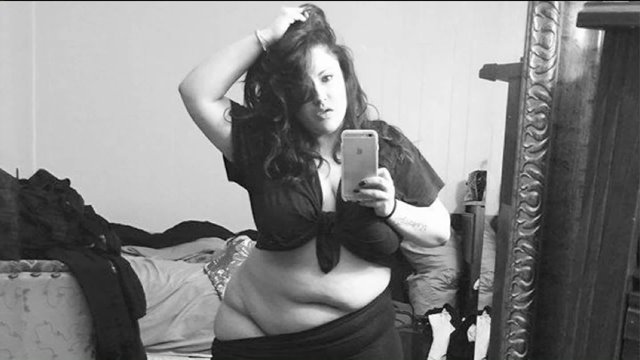 NEW YORK— Reality star and aspiring singer Mar Ortiz has never shied away from talking about her weight.
As the star of Lifetime Network’s “Big Women, Big Love,” the New Jersey resident made several waves but it’s what she recently posted online that nearly broke the Internet.

A candid photograph where she exposed her hips and stomach, proclaiming that she loved her love handles, was apparently too much for social media.

“When I was undressing, getting ready to put my pajamas on I looked in the mirror and I felt beautiful,” Ortiz recalled when taking the selfie back on Jan. 10. “I felt sexy as a woman, I just wanted to share it but I had no idea that was gonna happen.”

What happened was over 100,000 likes followed by an onslaught of comments both praising Ortiz for her confidence and slamming her for glorifying obesity.

“I don’t glorify anything but self love like I even stated in my post if I want to lose weight I will,” she said. “I know what it is to be healthy and I’m not unhealthy.”

“I’m overweight yes, I know that but I’m not obese and I think there’s a big difference.”

As the debate heats up online, support for Ortiz is building.

According to Jade, the viral selfie is “inspirational”as it offers up some honesty in a sometimes-unrealistic newsfeed.

“What Mar did was introduce real life into social media and that’s something I’ve been dying to see,” she said.

“We’ve been subjected by society to think that small and skinny is really healthy but I think I’d like to flip that idea and get people thinking about the fact that maybe small and skinny isn’t always healthy – maybe these people are starving themselves."

Ortiz, who is releasing an album later this year, isn’t losing sleep from her critics on social media, saying she hopes the message behind her selfie isn’t lost.

“I just wanted to send out a message to young girls and women to be happy, to love yourself, to feel sexy no matter what size you are.”