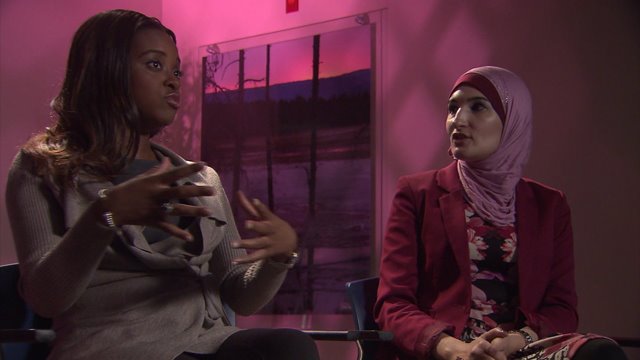 On the surface, it may appear Linda Sarsour and Tamika Mallory couldn’t be more different, but look deeper and the similarities are almost uncanny.

Mallory, was almost bred in activism.  Her parents were two of Reverend Al Sharpton’s first members at the National Action Network when it was founded about 25 years ago.  Years later, however, a tragic turn in her own life forced Mallory into a different kind of action.

"It wasn’t until my son’s father was murdered when my son was two years old which was in 2001 that I sort of began to take on my own sort of activism. He was murdered and it was gun violence and I was so angry about what am I supposed to do as a single mother with this son and then I realized there were so many other women who had the same story," explained Mallory.

Sarsour, is the product of Palestinian immigrants who lived under military rule in the Occupied Territories.

She says she’s a born activist.

"My real activism started domestically on 9/11 and it wasn’t by accident.  I didn’t have a choice as an American Muslim, born and raised in New York City watching my community targeted by government policies, by the rhetoric by somehow we were connected to individuals who committed a very horrific act we had nothing to do with," said Sarsour.

The two are kindred spirits.  They knew of one another for some time, but were brought together more recently by of all things- tragedy and a movement.  The death of Eric Garner and Black Lives Matter.

Nearly one year ago, Sarsour, marched with Mallory and countless others representing virtually every race and religion.  The March2Justice, as it was known, was a powerful and emotional journey from New York to Washington DC to protest police brutality, but more broadly to continue to fight for the message Dr. Martin Luther King Junior gave his life for.

On January 15th, Martin Luther King Junior would have been 87 years old and while he spoke of little black boys and little black girls, Sarsour and Mallory believe Dr. King was speaking of children of all races and ethnicities.

The two acknowledge, however, there is so much more work ahead.  Black Lives Matter has created a larger discussion about race relations and now, thanks to polarizing rhetoric on the campaign train, a new target has been created, American Muslims.

"I wholeheartedly believe in a country where black lives matter, my life will matter and my children lives will matter.  I think we are in a battle of hearts and minds," said Sarsour.