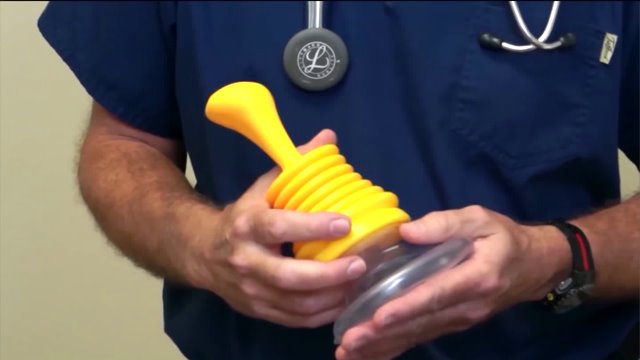 NEW YORK – A new potentially life saving device is in the spotlight after questions from a medical watchdog.  LifeVac claims to help choking victims by suctioning blockages from their airways, but some say it needs more testing first and now it's being pulled from several local schools.

But Arthur Lih says his product might have saved the little girl's life.  Lih created LifeVac after learning about another 7-year-old who choked to death on a grape in 2011.  At the time his daughter was the same age.  So Lih set out to create a device that could remove a blockage from a persons throat.

"People have dislodged objects by tilting kids upside down and it's fallen out.  So I knew it didn't take a lot," said Lih as we sat in his garage where he invented the product.  "I saw a simple sink plunger and I put it on my face and pulled it and said 'This will do it.'"

He's kept a record of choking incidents at schools throughout the country, including Noelia.

"We've had 27 deaths in the schools over the last three or four years.  So we lose anywhere from five to seven kids.  We lost two in under a year right here in Brooklyn," said Lih.

Lih donated his device to several schools where children died after choking.  The LifeVac even became part of the arsenal for several fire departments on Long Island.  Last month the Lindenhurst School district said it would put LifeVac in all of it's schools.

"You have to follow the protocol for a choking victim," said Lindenhurst Union Free School District Superintendent Daniel Giordano.  "But if it doesn't get dislodged you need something else to do it.  So that's why we bought them."  Several New York City Schools were also named on a list of "Schools Equipped with LifeVac".

But last week Peter Heimlich, son of the inventor or the Heimlich maneuver, wrote letters to the Commissioner of the State Education Department and NYC Schools Chancellor Carmen Farina saying, "it's unclear if the device has been properly tested and/or determined to be safe."  While Heimlich does not have a medical background, he has served as a watchdog on the medical industry through his blog medfraud.

"I think everyone agrees that students deserve to receive the best possible medical care.  It's now up to the departments of education to determine if LifeVac meets that standard."

Since the DOE said it had no knowledge of LifeVac in any of it's schools and added, "The Department of Education does not recommend this device."

Lindenhurst has also pulled the plug on the potentially life-saving plunger, but superintendent Giordano says he's determined to bring it back.

"I'm going to work hard to get this so it can be used to help kids.  That's my concern," said Giordano.

Similar products have existed for years including Throat E-Vac which was pulled from production in the 1980's.

"It was a very dangerous and a bad idea, the one back then," said Dr. Charles Guildner.

But some doctors say LifeVac is different and have thrown their support behind the product.

Dr. William Holt said, "LifeVac is a significant advance for preventing choking-related deaths and I recommend it to all my patients."

Although, no LifeVac study has ever been published in a peer-reviewed medical journal, it was chosen for presentation to the American Journal of Gastroenterology.  The process is far less rigorous, but still significant.

The product hasn't technically been approved by the Food and Drug Administration, but that's because the FDA doesn't approve products like this.  It falls into a different class of products like neck braces and crutches which only need to be registered, which LifeVac is.

The product hasn't been used in a real life situation yet.  But now that it's been pulled from schools Lih says he's worried it won't be there if someone needs it.

"There's always a silver lining.  You have faith we're bringing attention to the subject," said Lih.