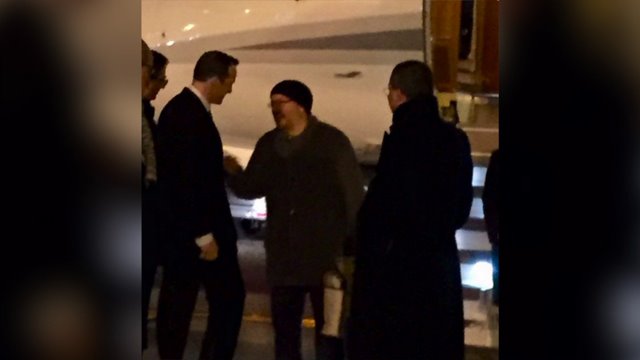 Three Americans freed in a prisoner swap with Iran arrived in Germany on Sunday evening after a brief stop in Switzerland, two White House officials said.

Though there was no official government confirmation of who was on the plane that landed at Ramstein Air Base, a U.S. military facility in southwest Germany, it's believed Washington Post journalist Jason Rezaian, Marine veteran Amir Hekmati and Christian pastor Saeed Abedini were on the same aircraft.

The three were scheduled to be transported to Landstuhl Regional Medical Center, a U.S. military hospital, after arriving.

The men's families issued statements confirming the three -- who were among five U.S. prisoners Iran released -- had left Iran, and a U.S. State Department special presidential envoy tweeted that he was looking forward to meeting them in Switzerland.

"Overwhelmed to greet Jason #Rezaian, his wife, Yegi, mother, Mary + Saeed #Abedini + Amir #Hekmati to #Geneva after safely departing #Iran," the State Department's Brett McGurk said on Twitter. He later posted a photo that appears to show Rezaian standing on a tarmac outside a plane.

The fourth prisoner released in the swap, identified by U.S. officials as Nosratollah Khosravi-Roodsari, decided not to leave Iran, senior White House officials said. "It's his free determination" whether he wants to stay in Iran, one official said. "We don't make that judgment."

White House officials said earlier Sunday that recently detained student Matthew Trevithick also was released -- but not as part of the prisoner swap -- and had left Iran. There were no additional details.

The five Americans had been detained in separate cases, some as early as 2011.

The Washington Post's executive editor and foreign editor told CNN that they were in Germany waiting to meet with Rezaian.

"I'm relieved, but I'm also elated. I remember the morning a year and a half ago when a scratchy cell phone call told me Jason and his wife had been taken from their apartment the night before," said Doug Jehl, the newspaper's foreign editor. "We never could have believed that this nightmare would go on for so long, but I'm just overjoyed that it's about to be over."

The journalist's brother, Ali Rezaian, said Jason Rezaian is a talented journalist and devoted family man "whose life was unfairly interrupted when he was arrested for crimes he did not commit."

He added, "After nearly a year and a half of arbitrary delays, and an unfair, opaque judicial process, Jason's release has brought indescribable relief and joy to our family -- this nightmare is approaching an end."

An 11th-hour disagreement over whether Rezaian's mother was on board the flight delayed the plane's departure, a U.S. official said, but Secretary of State John Kerry said in an interview with The Washington Post that Iranian Foreign Minister Javad Zarif assigned four people to help resolve the dispute.

Naghmeh Abedini, the pastor's wife, said on Twitter that she was hoping to talk with her husband in a few hours. In the meantime, she spoke on the phone with President Barack Obama.

In exchange for the American prisoners' freedom, the United States is pardoning or commuting the sentences of an Iranian and six dual citizens of the United States and Iran in what Obama called a "one-time gesture."

Earlier Sunday, they walked free from detention in the United States, a lawyer for one of the men said.

The men allegedly had been involved in exporting products and services to Iran in violation of trade sanctions against the country. They were accused of exporting goods ranging from electronic components and satellite services to marine navigation and military equipment to Iran.

Attorneys for some of the released prisoners confirmed their identities: Bahram Mechanich and Tooraj Faridi of Houston; Khosrow Afghahi of Los Angeles; Ali Saboonchi of Parkville, Maryland; and Arash Ghahreman of Staten Island, New York. The state-run Islamic Republic News Agency named the other men as Nader Madanloo and Nima Golestaneh.

Obama praised the "tireless" effort that went into the prisoner exchange, which comes a day after international inspectors concluded Tehran was in compliance with the deal governing its nuclear program. Iranian officials and U.S. administration officials confirmed the news Saturday. As a result, some international economic sanctions against Iran were lifted.

The deal came after more than a year of secret negotiations, the officials said. The nuclear agreement "accelerated" the prisoner swap, Kerry said.

Two congressmen were headed to Germany to greet Rezaian and Hekmati.

"I am thrilled and relieved that Jason and these other Americans are no longer in prison," said Jared Huffman, who represents Rezaian and has been involved in his case.

Huffman said the freed prisoners won't be on U.S. soil for a few days, he said.

Rep. Dan Kildee, D-Michigan, said Hekmati's father had fallen ill in the more than four years that his son has been detained. There is hope "that having Amir back gives him some strength."

He said family members were feeling "tempered jubilation" while they waited to find out if Hekmati was really released, because they've gotten their hopes up in the past.

"Until he was out of Iran, until I got a call from the White House today saying the plane has crossed Iranian border, he is out of Iran, we all took a deep breath. Because it all became real," the congressman told CNN.

In a statement, Kildee addressed Hekmati, saying, "Amir, I cannot wait to meet you for the first time, give you a big hug, and welcome you home."

The agreement also calls for Iranian officials to "continue cooperating with the United States to determine the whereabouts of Robert Levinson," a U.S. official said. Levinson, a former FBI agent and CIA contractor, went missing in Iran in 2007.

Iran has denied holding him.

"We are happy for the other families," Levinson's family said in a statement. "But once again, Bob Levinson has been left behind. We are devastated."

Trevithick's release was not part of the prisoner swap, but U.S. officials did "indicate to Foreign Minister Zarif that it'd be important for them to try to resolve some of the other cases of Americans detained in the context of this 'deal,'" a senior administration official told CNN.