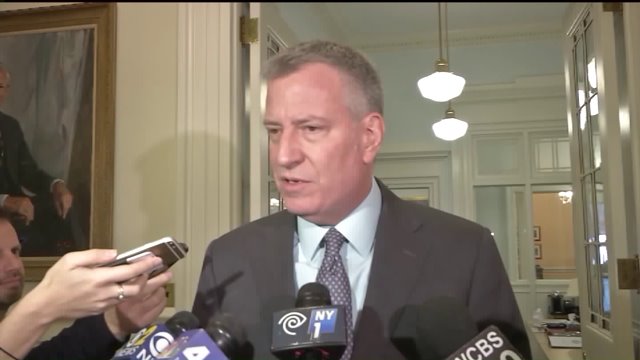 NEW YORK – Governor Cuomo and Mayor de Blasio jumped into the "New York values" feud with a sharp tweet directed at Ted Cruz, one day after the Cruz went after Donald Trump during the South Carolina GOP debate.

"If @TedCruz had any class, he’d apologize to the people of New York, not that we need or want it," Cuomo tweeted.

Cuomo was responding to the Texas senator's quip that Trump "embodies New York values."  When asked during the debate what that meant, Cruz alluded to "socially liberal" views and said "not a lot of conservatives come out of Manhattan."

The comment may have backfired, however, as it set up the New York billionaire's powerful response referencing New Yorkers' efforts after 9/11.  It was a sharp change in momentum that even left Cruz nodding in agreement.

Not to be left out, Mayor de Blasio also tweeted Friday morning, first praising Trump for "his tribute to our city's heroic response to terrorism," then, six minutes later, questioning his views on Muslims.  In between those two tweets, the mayor wondered whether Ted Cruz has a problem with New York values "when he asks Goldman for massive loans or when he comes her to gobble up cash?"

Not only did Cruz's statement launched a fiery exchange between Trump and Cruz, signaling the end of their strategic bromance, he also unwittingly launched the #NewYorkValues trend on Twitter.  Here's a small sampling of the Internet's response, both hilarious and heartfelt:

More #NewYorkValues: "gruff tolerance," "intolerance of bull," ppl who learn to live together. Efficiency. No small talk before coffee!

#NewYorkValues is total strangers helping a mom lug her stroller and child up the subway steps. This is oUr EVERY DAY

Crappy #newyorkvalues include "giving a cold man the shirt off your back"https://t.co/7SE3Rog1cM

Hey @tedcruz remember that time when you pissed off 8 million of the worlds most aggressively accomplished people? They will. #NewYorkValues