Nikki Haley: What’s in her name? 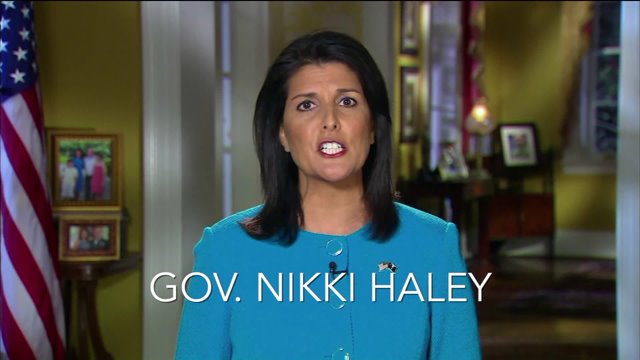 Governor Nikki Haley was recently thrust into the national spotlight after tragedy struck her state.

Nine black worshippers were targeted and killed in a racially motivated attack inside of their Charleston church.  Soon after, Haley responded to calls to remove a long standing symbol of hate in the state, the Confederate Flag.

On Tuesday night, Governor Haley was out front and center yet again and this time it was because she was chosen by the GOP to offer the party’s rebuttal following President Obama’s State of the Union.

While there is much conversation about the context of her words and criticism of both parties, there is also a separate discussion stirring and it’s surrounding Nikki Haley’s name.  The one she doesn’t use in public.  The Indian American leader was born Nimrata Randhawa.

Haley has explained the name Nikki was her nickname growing up and referring to her as “the little one.”  Haley is her married name.  However, many have now verbally attacked Haley on social media, saying she’s somehow denouncing her Indian heritage by changing her name or even implying Haley is ashamed of her culture.

"Nikki Haley is not the first elected official to change her name and she won't be the last,” said Brian Browne, Assistant Vice President of Government Relations at St. John’s University.

Browne points out the United States has a long history of politicians changing their names.

"Barack Obama went by Barry up until his early years in college. Hillary Rodham Clinton for years used her maiden name until recently.  The list goes on and on,” said Browne.

According to Browne, there’s no denying name changes often times are made to appeal to voters.

But what’s really in a name? Do names matter so much that it’s worth changing?

“In terms of branding what you want to think about is your audience before you're making any kind of decision that way.  What you need to do is what's best for your audience and how it's going to serve them and what's easiest for them to understand,” said Criswell.

Browne also points out simple American history, taking us back to Ellis Island.

Immigrants flooded into the United States there and so many changed their names and identities for greater acceptance..