Queens woman accused of holding children as slaves for 6 years 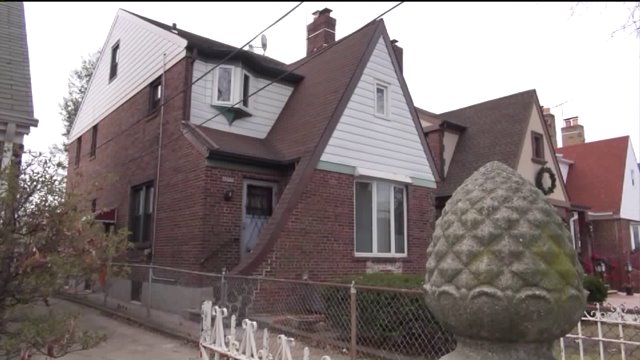 FLUSHING, Queens – The neat brick facade along the tree-lined Queens street gave no indication of the horrific crimes taking place inside, according to the district attorney.

Sook Yeong Park, 42, is accused of holding two South Korean children as slaves for six years, starting when they were just 9 and 11.  Park, who faces charges of labor trafficking, among others, forced both children to work grueling hours at the house and at nearby businesses, forcing one child to sleep on the floor with no mattress and the other in a closet, according to the Queens District Attorney.

The neat house, located on a tree-lined street in Queens, gave no clues as to the horrific treatment occurring inside on a daily basis, according to the Queens district attorney. (Google)

“According to the charges, the defendant cut off all contact between the two young victims and their parents in Korea," said D.A. Richard A. Brown.  Park enslaved the children after one of her relatives brought the brother and sister to the country in January 2010, according to the criminal complaint.  She then confiscated their passports and moved into a well-kept home on 196th Street, where she would hold them for years, Brown said.

One neighbor, who asked not to be identified, said she sometimes saw the kids in front of the house raking leaves or doing other chores.  "Honestly you'd just think it was a cultural thing," she told PIX11.  "You'd see the kids, but there was no indication (of abuse) . . . we didn't even know that it wasn't their mother."

The children were forced to meticulously clean the house, with the girl working after school from 4 p.m. to 2 a.m., during which time she was also expected to give Park lengthy massages, manicures and pedicures, according to the complaint.  On at least one occasion, Park allegedly made the girl give her a body massage for five hours while she watched television.

Sometimes she would pull the children out of school for days or even a month while forcing them to work on her home at 43-52 196th St., according to the district attorney.  Along with the work at home, Park made the girl and her brother work at a Queens grocery store for $10 an hour and pocketed all of her earnings, according to the complaint.

When she was angry, Park would routinely beat the children, hitting them with objects, slapping them, kicking them and stomping on their legs, Brown said.  In November 2015, Park apparently became enraged over a pedicure and attacked the girl, scratching her legs with a nail clipper, he said.

Just this year, on January 4, Park repeatedly kicked the girl's leg until it swelled up, then cut off her hair and kicked her in the head, according to the complaint.  Two days later, the assistant principal at Francis Lewis High School noticed the bruises on the girl's legs and asked her what happened.  School officials said they had noticed how the girl missed classes regularly and was often so tired she fell asleep in class.

Once she explained how the bruise allegedly happened, the assistant principal drove to Park's house and demanded the children's passports, which Park turned over, then went to the grocery store to collect the money owed to the brother and sister, according to court documents.  School officials notified police and the subsequent investigation resulted in Park's arrest.

When the children finally were able to call their parents in South Korea last week, it was the first time they had spoken in three years, according to the DA.

Park was arraigned Saturday in Queens Criminal Court on charges of labor trafficking, third-degree assault and endangering the welfare of a child.  Park faces up to seven years in prison and was held on $10,000 bond.  She is due back in court February 16.