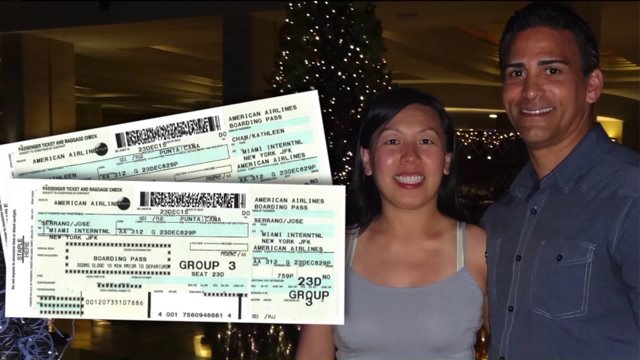 QUEENS – It was two days before Christmas, when Kathleen Chan and Jay Serrano—who share a home together in Astoria—were flying back to JFK Airport from their latest Caribbean vacation.

They had caught American Airlines Flight 312 from Miami, after an initial flight from the Dominican Republic, where they’d been relaxing on the beach for a week.

When they landed, the flight captain made an announcement.

“Please remain in your seats, with your seatbelts fastened,” Serrano remembers the pilot saying.

The couple says within twenty minutes, the door to the cabin opened and three, armed Port Authority police officers started walking down the aisle.

They stopped at aisle 23, where Chan and Serrano were sitting.  One of them looked at Kathleen Chan.

“And he turns to her and says, ‘Do you have ID?’” Serrano remembered.

Chan showed her New York State driver’s license, with its photo ID and proof that she lived at the same address in Astoria that Serrano did.

In fact, the couple was about to mark nine years together,  which included buying their Queens home in 2011 and refurbishing it.

Neither knew that the flight crew had suspected Chan was being sexually trafficked.

Chan works in human resources at The Durst Organization in midtown, and Serrano is properties manager for the high-end Coach company, which sells bags and accessories, based in the Hudson Yards.

Chan was born and raised in the United States; her parents are immigrants from Hong Kong.

Serrano was born in Puerto Rico.

They call themselves opposites who complement each other.

“He actually likes to crack a lot of jokes,” Chan said.  “He made me laugh.”

And while Chan got Serrano into travel and culinary delights, Serrano taught Chan how to bike and swim, and they’ve done triathalons together.

The Port Authority police officers didn’t know any of this, when one of them took Kathleen Chan outside the plane’s cabin.

“I asked him, ‘Can you tell me what this is about?’” Chan recalled.  “He told me the flight crew had alerted the police that it was a possible case of sex trafficking.  They thought I had not spoken any English, and that I was taking directions from Jay during the flight.”

When Jay Serrano was finally allowed to meet Chan outside the plane’s cabin, he emotionally recalled the stares he drew from fellow passengers, as he went down the aisle.

“To hear someone think I’m selling her, or she’s a hooker, that pissed me off,” Serrano told PIX 11 Investigates at the couple’s home.

The officers told Chan and Serrano the reasons they were flagged.  The flight crew had noticed that Chan followed Serrano to the bathroom, when he needed to use the facilities.

Serrano told PIX 11 he had a fever and was sick during the turbulent flight, so Chan helped him get to the bathroom, and she waited for him outside.

At one point, a male flight attendant asked Chan to move from his seat.

At another point, Serrano requested a half cup of orange juice, and when he received a full cup, he gave some to Chan, who requested a stirrer.

When we contacted American Airlines about the incident, Ross Feinstein, Senior Manager for Corporate Communications, told us human trafficking is a huge issue for all the airlines and the travel industry in general.

“At American, the safety and security of our customers and employees is our top priority,” Feinstein said in a formal statement.  “Out of an abundance of caution, our employees are trained to report any activity that is out of the ordinary.”

It’s estimated that 800,000 to one million minors and women are sexually trafficked every year….on planes, trains, and in automobiles.  Many more are victims of sex tourism in their home countries.

Michelle Guelbart, who works with the travel industry for the anti-trafficking organization, ECPAT USA, explained that flight crews are taught to look for certain indicators.

“You mentioned that when he went to the bathroom, she followed him,” Guelbart remarked to PIX 11.  “One of the indicators for sex trafficking is someone who’s not allowed to move freely through the cabin.”

Guelbart added, “Maybe the airlines want to be safer rather than sorry.”

The Department of Homeland Security has been training employees in various industries, part of an initiative called “Operation Blue,” which offers clues on how to spot victims of sexual trafficking.

Chan and Serrano are not the first travelers to get stopped by law enforcement concerned about sex  trafficking in the last month.

Back on December 9th, 2015, eight members of the South Korean pop band “Oh My Girl” were detained for fifteen hours at LAX—and finally just flew home, instead of staying.

Officers with U.S. Customs and Border Patrol had suspicions they might be underage sex workers.

Kathleen Chan concluded of her own situation, “We don’t fit the profile.”  And she added, “We just want to make this known. It wasn’t fair.”