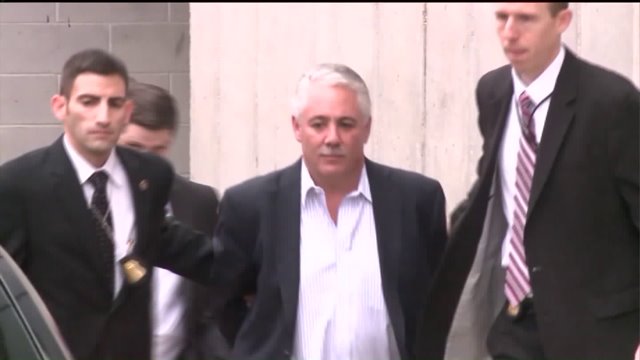 CENTRAL ISLIP, N.Y. — He's accused of using his badge to make money by stealing from people he was sworn to protect.  Now, the trial for a 25-year veteran police officer has begun, and some observers say that his case indicates widespread corruption.

The trial of now-retired Suffolk County police sergeant Scott Greene, 52, features some key evidence that has a key witness to go with it.  There is surveillance video of Sgt. Greene taking money from a cash envelope left on a motorist's seat during a traffic stop two years ago.

That motorist, however, is an undercover investigator for the Suffolk County district attorney's office.  He was driving a car equipped with interior surveillance cameras in an area of Suffolk County that Greene patrolled.  Greene took $100 from the investigator posing as a motorist, and Greene deposited it in his sleeve.  It was a crime captured by the camera, which Sgt. Greene does not dispute.  However, a further aspect of the crime Greene's attorney denies vehemently.

"The hate crime is manufactured," said Scott Gross, Sgt. Greene's lawyer, regarding his client's case being treated as a hate crime, with far more serious consequences than the petit larceny of stealing a $100 bill.  Gross called the hate crime charge "a figment of the DA's office imagination."

Specifically, Sgt. Greene is accused of  hate crimes against Latinos.  The trial that began Tuesday is over about a half dozen documented cases of Greene pulling over Latino motorists. The drivers Greene allegedly targeted were known to carry cash, which he then took from them, with the expectation that they wouldn't report him, out of concern that their immigration status might be exposed, or for other reasons.  Greene's defense lawyer described the accusations as falsehoods.

A courtroom legal observer strongly disagreed. "When there's overwhelming evidence of guilt," said Jose Perez, an attorney with the advocacy group Latino Justice, "obviously, the defense has to come up with something.  They're grasping at straws, that's what they're doing."

He also mentioned how the mid-December arrest by the FBI of recently resigned Suffolk County police chief James Burke on civil rights and conspiracy charges could be an indication of greater problems, across the ranks.  "The entire deparment from the top down needs to be reformed," said Perez, "it needs to be cleaned out.  I  hope the Justice Department takes full action."

Prosecutors in Chief Burke's case have said that for decades, throughout the chief's career, the department has been rife with corruption.  It doesn't help, by the way, that it's now been determined that the chief,  who's currently being held without bail, will receive a $435,000 payment for unused sick leave and vacation time.

While he is entitled to that money, federal investigators and legal advocates criticize the system that permits it.

"Who knows where that is going to lead to and what else is going to come out of there?" asked Perez, regarding the ongoing investigation into Burke and his leadership of the department.  "Are there going to be other higher ranking members of the department who were involved or were complicit in misconduct?  That remains to be seen," Perez said.

Meanwhile Sgt. Greene's trial is the first of two.  He faces further charges of hate crimes against more than a dozen other Latino motorists who reported him to a police complaint board.  The trial in that case has yet to be scheduled.

Burke, however, is scheduled to be in court on Wednesday, in the federal courthouse across the street from the state court in which Burke's former underling, Greene, is being tried.

Before a federal judge on Wednesday, Chief Burke's attorney is expected to ask that his client be granted bail, after it was denied to him last month.