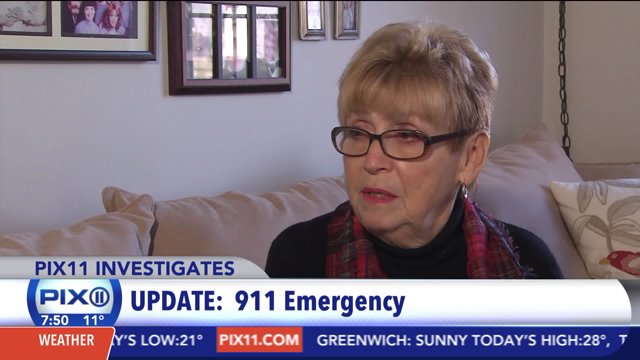 For weeks now, PIX11 News has been investigating the troubled 911 system in Nassau County after claims a number of people were put on hold when calling in an emergency. Despite claims from the police department that their are no issues, PIX11 uncovered another situation from Dec. 27.

Maureen Breidenbach and her son Jimmy were pulling into a TD Bank parking lot in Massapequa at 12:30 p.m. when they noticed men in ski masks approaching the bank. Note, it was almost 60 degrees that day.

"Ma, the bank is being robbed and they have guns, we have to get out of here," Breidenbach recalled her son telling her.

The two jumped in the car and drove off while dialing 911 to call in the emergency, except they didn't get a person on the other end of the line.

"He heard the message, 'Your call will be answered in the ordered it was received,'" Breidenbach said.

Breidenbach said her son was on hold for nearly three minutes, with the entire call lasting four minutes.

However, Nassau police say her son was on hold for 1 minute 27 seconds before an operator answered.

Regardless, the two masked robbers escaped and have still not been caught.

"It was like I'm calling Time Warner Cable instead of the police," Breidenbach said.

Our investigation into the Counties' 911 system recently uncovered a point in time when just one operator was answering the phones for the entire county of 1.4 million people. On this specific date, sources tell PIX11 four operators were on duty. However, Nassau police dispute that claim saying 10 operators were working that day.

"If you see something, say something," Breidenbach said. "But, if there is no one to hear you, what good is it?"